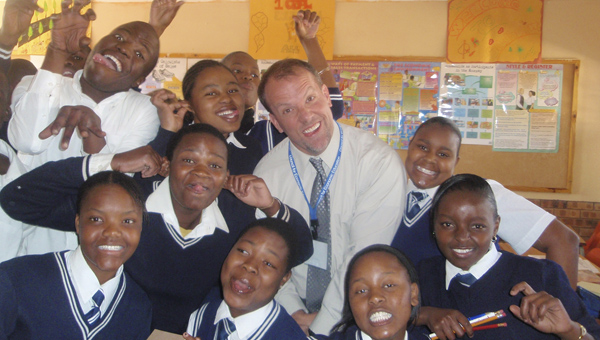 Jerry Bizjak, with students at a school he visited in South Africa, make silly faces for the camera. -- Submitted photo

An economics and history teacher at Albert Lea High School had a chance to once again travel the world and learn more about schools in other countries.

Jerry Bizjak has taught at the high school and Southwest Middle School, for a total of 14 years teaching in Albert Lea. He recently traveled to South Africa and returned on Aug. 9. He previously has been to China and Pakistan in his effort to learn more about different countries. 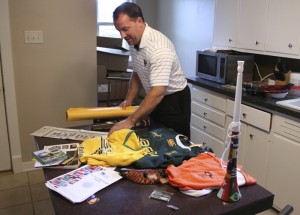 Jerry Bizjak displays some of the souvenirs and mementos from his trip to South Africa. Bizjak said he likes to travel to other countries and talk to locals to learn more about the world. -- Kelli Lageson/Albert Lea Tribune

He applied for a study tour of schools in the Republic of South Africa last spring through the Council for Economic Education, a nonprofit organization based in New York. He said he was fortunate to have been picked, as less than 30 teachers from around the United States were chosen.

“South Africa always kind of appealed to me,” Bizjak said.

He said the transformation the country has gone through after a long period of apartheid has interested him. Bizjak left Minnesota on July 26 and after a few days of meetings the group left for South Africa. The group was split into smaller groups so more schools could be visited.

“We went to three high schools near Johannesburg,” Bizjak said.

He said his group mostly went to poor, rural schools. The schools were in the outskirts of the larger cities and lacked many amenities Americans would find essential. Some schools had no lunch or bus programs. Another school didn’t have any computers. All schools had uniforms no matter the income-level of the student, and the students didn’t mind wearing the uniforms. 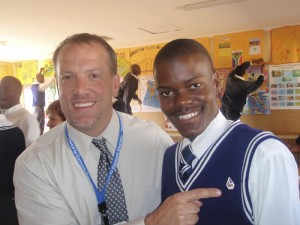 Students were excited about the small gifts from the group of teachers from the U.S. This student with Bizjak enjoyed his Albert Lea pin. Welcome signs are visible in the background, and Bizjak still has one that he brought home. -- Submitted photo

“A lot of the schools had teachers who were trained through the Council for Economic Education,” Bizjak said.

The group sat in on economics lessons at the schools and also met the students. Bizjak said the students were excited to chat with the group about the United States and many of them said they hoped they would live there someday.

One of the goals of the group was to identify similarities and differences between the students in South Africa and at the schools they taught at. Bizjak said one of the major disparities was that many students in South Africa had no parents. At one school, 35 of the 900 kids had “child-headed households,” Bizjak said. Many students had to deal with violence and extreme poverty outside of school.

“We were there to get a sense of their challenges,” Bizjak said. 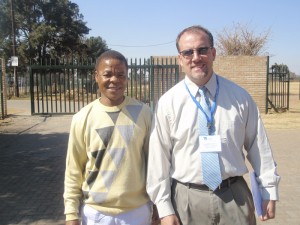 Bizjak, right, stands with an economics teacher and deputy prinicpal from a school in South Africa. The teacher said that the teachers visiting from the U.S. left a footprint at the school that will never be erased. -- Submitted photo

One of the major difficulties for students in South Africa is that even the students with good grades have a hard time getting into college. There are no guidance counselors to help with applications or financial aid. Bizjak said about 10 percent of students get to college and only about 30 percent graduate college, and that’s if they can graduate high school. Only a third of first-graders make it to the 10th grade, and only a third of 10th-graders graduate high school.

Bizjak hopes the trip will help him become a better teacher. He said it will help with is perspective as it made him appreciate the problems he deals with, which he said are obviously a lot different than the problems teachers have in South Africa. He said it was hard to believe that some of the areas he saw were poorer than some he’d seen in Pakistan and China.

He said the country has a long way to go in improving education after its violent past. It also has a lot of restructuring to do before education can become successful. One village he visited had just gotten running water in 2002. Language is also a problem, with 11 official languages. Bizjak said the group was in South Africa after the World Cup was finished, but he thinks it had a positive effect on the country.

“People seemed optimistic,” Bizjak said. “There was still a pride from it.”