Bob Kindler and Mark Harig advance in the race for Freeborn County sheriff. They will go head to head in the Nov. 2 general election. The campaigns for Ryan Merkouris and Marc Johnson come to a finish.

There are 40 out of 40 precincts reporting countywide. Here are results in the Freeborn County sheriff’s race for tonight:

Six of six wards have reported their results so far. Here are the results of the primary election for that race:

Here are the percentages so far for Freeborn County in the DFL gubernatorial race:

Refresh your browser to get updated results.

Statewide, Matt Entenza is conceding he can’t win Minnesota’s Democratic primary for governor as two others, Mark Dayton and Margaret Anderson Kelliher, battle it out for the nomination. With 30 percent of precincts reporting, Kelliher had a 15,000-vote lead over Dayton. She is the House speaker and he is a former U.S. senator. 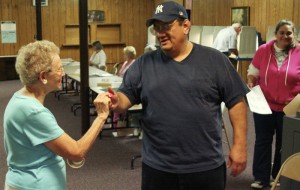 Entenza was thought to be trailing before Election Day, and early returns bore that out.
Entenza spent $5 million of his own money on the race. Most of Entenza’s spending on persistent mailings and television ads came from a family fortune. His wife made millions as a health company executive.
Minnesota hasn’t had a Democratic governor in two decades, during which Republicans and third-party candidates have held the executive spot.