See what he saws 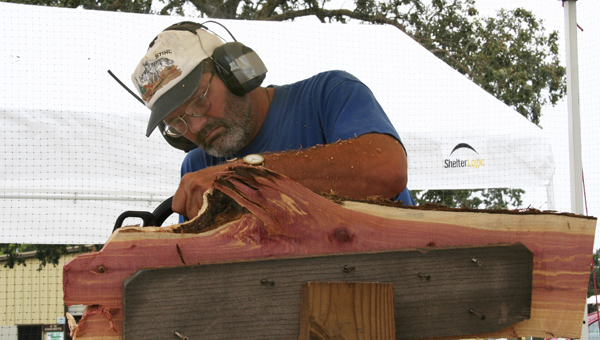 Pat Doyle of Floyd, Iowa, carves the word “welcome” into a piece of cedar Wednesday in front of morning visitors at the Freeborn County Fair. -- Tim Engstrom/Albert Lea Tribune

Fair-goers will again be treated to the art of using a chainsaw to transform logs into other things this year at the Freeborn County Fair.

Pat Doyle, of Floyd, Iowa, is at the fair again, and he has been here twice before. He has shows each day at different times where he makes something out of a log. His shows can take from 15 minutes to more than an hour depending on what he creates. He can make anything from animals to welcome signs out of wood.

“I like working with walnut, white pine, cedar and oak,” Doyle said. 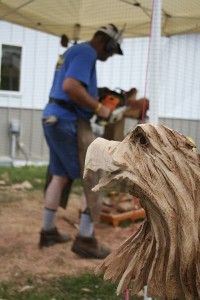 An oak eagle Pat Doyle carved perches in front of the audience Wednesday at the Freeborn County Fair and is for sale for $200. -- Tim Engstrom/Albert Lea

Those are woods he likes to use because of how long they last after carving. There are other woods that he won’t use like maple, elm and cottonwood.

“The wood needs to be durable,” Doyle said. “I want it to last.”

He said he’s seen people come back for shows who have seen him carve before. He tries to do new things as well as things he’s done before because he knows some people like to see the same thing again and others want to see new carvings. 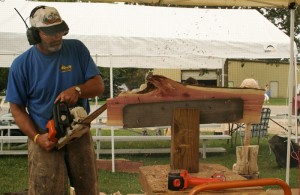 Sawdust flies as Pat Doyle cuts deeply in the corner of a wooden sign he makes Wednesday at the Freeborn County Fair. -- Tim Engstrom/Albert Lea Tribune

On Saturday all the carvings he’s made will go up for auction at 5 p.m. He also does pieces on commission. Popular commission pieces will have the owner’s name on it to put on or near their home.

“I want my customers to be happy,” Doyle said.

He started carving wood with chainsaws about 16 years ago as a hobby, and it has been his full-time job for 12 years. He goes to many fairs and festivals in spring, summer and fall. During winter he works on special order pieces and is quite busy around the holiday season. 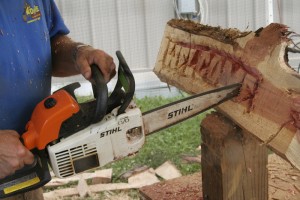 Pat Doyle deepens the space between the M and E in the word “welcome” on a piece of cedar Wednesday at the Freeborn County Fair. The carving ended with many decorative lines around the word. -- Tim Engstrom/Albert Lea

“To do something you love to do which brings enjoyment to people, it’s just a blessing,” Doyle said.

He uses about five saws to make his creations. The saws are different sizes, with smaller ones being used to add more detail to the wood. After making a sculpture he sands it to clean it up. He said he could spend an enormous amount of time on a creation, but that part of the appeal is that they look rough.

Doyle makes about 1,000 creations a year, with many commissioned by businesses and individuals. He has also created two 8-foot bears for the welcome sign for Floyd, Iowa. The sign can be seen on the Avenue of the Saints, highways 218 and 27, in Iowa. He has also made pieces that were auctioned for wildlife organizations like Pheasants Forever and Ducks Unlimited. In 2005 Doyle was featured at the Iowa State Fair, in Des Moines, Iowa.

— Chainsaw carving demonstrations are next to the Fairlane Building