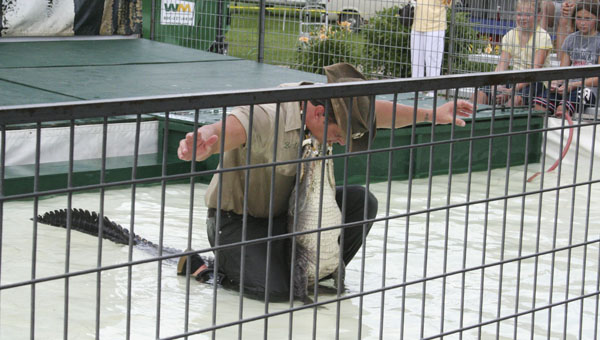 Bert Lucas is Kachunga in Kachunga and the Alligator Show. He illustrates how to tie an alligator’s jaws shut during the presenter’s first show at the Freeborn County Fair on Tuesday. — Sarah Stultz/Albert Lea Tribune

Florida reptiles have fair-goers in awe

Sitting on the edges of their seats Tuesday afternoon, audience members in the Rodeo Corral Square at the Freeborn County Fair looked on in awe as Kachunga unlocked a pen to release a 150-pound alligator into a pool of water.

For many, Kachunga and the Alligator Show was their first time seeing an alligator in person, but in Florida, showman Bert Lucas explained, there are an estimated over 2 million of these animals. Kachunga is the show name for Lucas, an alligator handler. 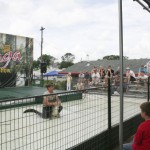 The audience at Kachunga and the Alligator Show looks on as Bert Lucas talks about the different characteristics of the alligator. — Sarah Stultz/Albert Lea Tribune

“They leave people alone if we choose to leave them alone,” Lucas said, as the alligator slowly began to swim around.

At times there were a few gasps from the crowd, but mostly people watched intently or took photos.

Lucas explained some of the characteristics and behaviors of alligators and also showed the audience how to catch an alligator and tie its jaws shut, among other acts, with only his bare hands.

“I thought it was a wonderful thing to bring grandkids to,” said area resident Jane Enger. “It’s an experience they’ll never have again.”

Her grandson Carter and granddaughter Kelsey took a photo with two baby alligators at the end of the show. Carter described the alligator he held as “heavy and squirmy.”

Kachunga and the Alligator Show is a new act at this year’s fair and is scheduled for shows at least twice a day throughout the week. 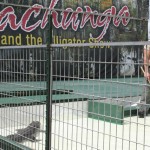 Bert Lucas releases an alligator from a pen at the start of the Kachunga and the Alligator Show Tuesday at the Freeborn County Fair. The show educated the audience about the different parts of an alligator, along with an explanation of some of their behaviors. — Sarah Stultz/Albert Lea Tribune

Lucas said there may be some confusion about what the show is about. It sometimes gets hyped as alligator wrestling, but it is a public awareness show that got started more than 20 years ago. No harm is done to the alligator during the show.

Answering everyone’s looming question, Lucas said there are three main reasons why an alligator may attack people: First, the alligator is a female guarding her young or a nest; second, the alligator is a larger male that is territorial; third, the barrier between the alligators and people has been broken down as a result of people feeding the animals. That’s why it is illegal in Florida to feed the aquatic reptiles.

Lucas said the alligator can swim at speeds as fast as 25 mph, and it can hold its breath for over an hour.

The bumps and ridges on its back help regulate its temperature, and the animal can exert 3,000 pounds of energy per square inch.

It is not uncommon for a large alligator to weigh as much as a thousand or more pounds, he said.

Bert Lucas releases an alligator from a pen at the start of the Kachunga and the Alligator Show Tuesday at the Freeborn County Fair. The show educated the audience about the different parts of an alligator, along with an explanation of some of their behaviors. — Sarah Stultz/Albert Lea Tribune

Lucas said he has two larger alligators for the show — one is used at a time — and then he also showed the audience some smaller alligators, including a rare albino breed.

People could take photos with one the smaller gators for a fee afterward.

Seven-year-old Logan Ruff said his favorite part of the show was holding a small alligator after the show. He said he had never seen one before.

* This show is in the Rodeo Corral Square