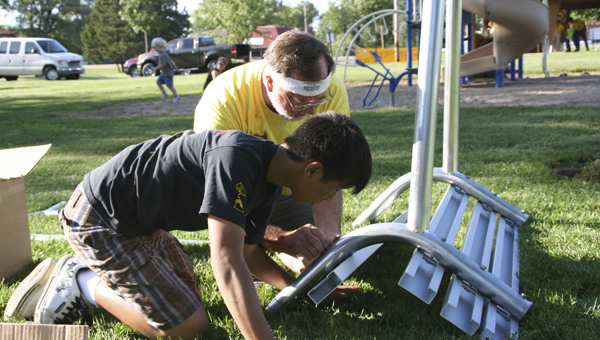 Rick Walther (yellow) and his son Nick assemble a park bench in Hollandale in 2009 as part of Shinefest. -- Tribune file photo

The faith community in Freeborn County will come together next week for the fourth annual Shinefest Week of Service.

Service projects kick off Monday with a school cleanup at Lakeview Elementary School. Cleanups have also been scheduled at Brookside Education Center on Tuesday, Hawthorne Elementary School on Wednesday, and Sibley Elementary and Southwest Middle School on Thursday.

Shinefest organizer Mark Whillock said volunteers for these projects will mostly be spreading wood chips around the playground equipment at the schools, and some will clean up shrubs and bushes as well.

On Tuesday, there will also be a Hollandale Community Picnic. There will be food donated through Shinefest and music by Shine Ministries.

On Saturday, volunteers can take part in a lake cleanup, starting at 9 a.m. and going to noon.

Whillock said volunteers are asked to meet at the Pelican Breeze boat landing and they will start in the waterway between Albert Lea Lake and Fountain Lake where a lot of trash collects.

People can also clean up along the shoreline of both lakes.

From 9 a.m. to noon Saturday there will be 10 different bays set up at the Freeborn County Fairgrounds to conduct oil changes for families in need. Participating families are asked to bring their own filter.

Anyone who is mechanically inclined is welcome to volunteer, Whillock added.

The annual Shinefest blood drive will take place in the Fairlane Building at the fairgrounds from 9 a.m. to 1 p.m. Saturday.

Also at the fairgrounds, the Salvation Army will be conducting a clothing and food drive.

“Anybody is welcome to join in,” Whillock said. “They don’t have to have a whole team or a bunch of people to join in.”

The service projects give people in the community several options for how to get involved.

“What we try to do this week of service is to try to create a culture of service,” Whillock said. “If they enjoy what they did for the week they can say, ‘Hey, we can do this once a month with their own church, or coordinate with other churches.’”

He said there are about 16 churches in Freeborn County that are involved in Shinefest.

Over the four years since Shinefest began, he noted that he has enjoyed seeing new and different churches become involved with the projects.

He said the Albert Lea School District has been helpful in getting projects ready for the volunteers.

Since Shinefest started, it has expanded to include several other events throughout the year, the most recently developed being the Healing Hearts and Homes project.

Whillock said new T-shirts will be available for purchase for $10 throughout the week.