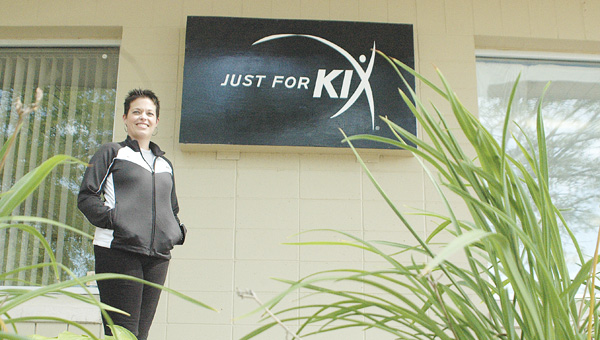 Aimee Struck stands outside the Just For Kix studio that is under construction at 1360 W. Main St. in Albert Lea. The space is slated to open Sept. 8. -- Andrew Dyrdal/Albert Lea Tribune

For the first time ever, Albert Lea’s Just For Kix program will have its own space. No shared offices, no carpet, just hardwood and room for inspiration.

“I can’t wait,” Aimee Struck, program director for Albert Lea’s Just For Kix, said of opening the studio on Sep. 8. “I sent out an email to parents and got so many responses back about how excited the girls are. Ultimately it’s about them.”

With the move, Just For Kix is ending its 12 year tenure with the Albert Lea City Arena. Before that, they were in the Northbridge Mall for two years.

“It’s our own space,” Struck said. “It’s not a room in a building. It’s more professional and takes it up a notch.” 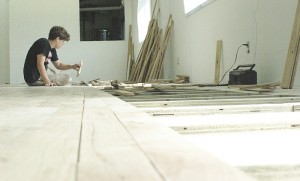 John Wrolson lays red oak floor in the Just For Kix studio Tuesday. The wood will be sanded and stained before the space opens. -- Andrew Dyrdal/Albert Lea Tribune

The new space will have a hardwood dance floor, mirrors, a waiting room, bathrooms and office space — all things they’ve never had in one facility.

Struck started as the program director for Just For Kix in 1996. The Mankato State University graduate worked in her field shortly, but ultimately decided to go back to the sport she loved.

“Dance is my passion,” Struck said. “It was a void that I had to fill.”

Since filling that void, Struck has brought thousands of dancers through Just For Kix, with around 325 currently involved.

Struck hopes to get that number over 400. The new space should help.

“I took studio dance and I always wanted to be in the studio,” Struck said. “Outside of class time, it’s just a place to be.”

The new facility will house 17 classes a week, featuring every type of dance from kick to jazz, hip hop and partner dance, and ages three through young adult.

The space will easily accommodate kick, which has 30 dancers practicing at once.

“The large class sizes with (kick) work — the dancers don’t mess around because if they do they’ll have chaos,” Struck said.

Struck hopes the new dance studio is finished by Sept. 1. It will officially open when registration starts on Sept.8 and will see its first action when classes start of Sept. 18.