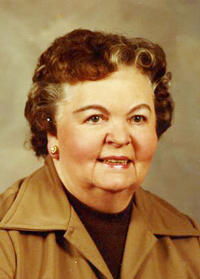 Albert Lea. Funeral services will be held Wednesday at 2 p.m. at North Blue Earth Lutheran Church in Brush Creek Township, Faribault County. Visitation will be from noon until 2 p.m. at the church on Wednesday. The Rev. Patricia Hinkie is officiating and burial will be in North Blue Earth Lutheran Church Cemetery, Brush Creek Township, Faribault County. Bruss-Heitner Funeral Home in Bricelyn is assisting the family with arrangements.
Sylvia was born July 8, 1922, on a farm in rural Bricelyn, the daughter of Bernholt and Johanna (Mork) Blom.
Sylvia graduated from Bricelyn High School in 1940 and from Naeve Hospital School of Nursing in Albert Lea as a registered nurse. She continued her education at the University of Minnesota School of Public Health with a degree in public health nursing. Sylvia was the Freeborn County Public Health nurse — she worked in many Freeborn County area schools running the immunization, hearing, vision and polio vaccine clinics. She helped with Freeborn County child neglect cases and she conducted home visits to the elderly. Sylvia retired as Freeborn County Public Health nurse in 1976. On Sept. 25, 1976, she married Evan Wulff. Sylvia and Evan enjoyed traveling during their time together until Evan’s death in 1982. After her retirement, she focused on caring for her aging parents and her sister until their passing. In 2003, Sylvia moved to Oak Park Assisted Living Center in Albert Lea and lived there until 2006 when she moved into Good Samaritan Center in rural Albert Lea. Sylvia loved bird watching and being out in nature — she especially enjoyed watching the leaves change.
Sylvia is survived by her three nephews: Paul (Marsha) Blom of Bricelyn, Morris Blom of Bricelyn, Bryan (Tammy) Blom of Byron; four grandnieces: Melanie (Victor) Ferris of Minneapolis, Megan (Nathan) Eitzmann of Hardy, Neb., Andrea and Kristin Blom of Byron; and a grandnephew, Mark Blom of Bricelyn.
She was preceded in death by her parents; husband, Evan; sister, Cassandra Blom; brother and sister-in-law: Bertrand and Marjorie Blom.