Taking on all elements 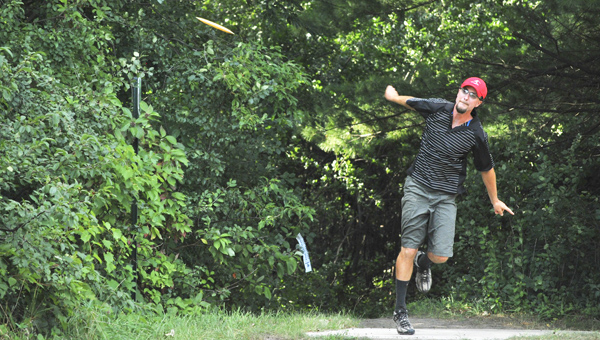 After 18 holes, Derreck Walk and Eric Harbacheck joined Schorn for a playoff starting on Hole 1 of the course. The fourth finalist, Deric Moore, did not qualify for the playoff after parring the round’s final hole and finishing with an even-par 54. 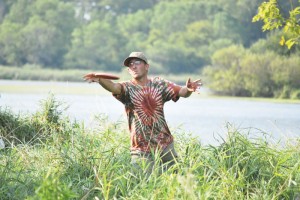 Derreck Walk putts out of the weeds on Hole 2 in the sudden death playoff at Bancroft Bay Park. -- Buck Monson/BuckMonsonPhoto.com

All three disc golfers pared the first hole of the playoff and Walk looked to be in control after Harbacheck and Schorn landed their tee shots far from the basket on Hole 2. Harbacheck bogied, falling to third, and Walk pared but Schorn made a 40-foot putt to save par and force a third hole.

“I thought I was a goner,” Schorn said. “I flicked my putter twice and threw it into the basket. You can’t ask for anything better than that.”

On the third hole, which features a narrow fairway of dirt surrounded by trees that hooks as it climbs towards the basket, Schorn and Walk seemingly each had good tee shots, but couldn’t see exactly where their discs landed.

When they reached the top of the hole, Schorn’s was laying right underneath the basket but Walk’s was 80-feet away from the chains. Walk managed to hit the rim on his second shot and Schorn dropped his disc in for birdie and the championship.

“I played solid,” Schorn said of his championship round. “I made four huge putts — two for par and two for birdie.”

Schorn also felt privileged to play alone with Walk on what turned out to be the day’s final hole.

Walk opened the championship round with a birdie on Hole 1. His second shot landed on the top of the basket, sat there for a moment, and then fell into the chains. Harbacheck also birdied Hole 1. When Harbacheck bogied Hole 2, Walk gained sole possession of first place, which he held until after Hole 12.

There were opportunities for the other disc golfers to catch Walk, but high winds kept scores high and forced changes in play. The entire foursome bogied Hole 7 and pared Hole 8.

“The wind made me play pretty careful,” Walk said. “I played nice and easy.”

Walk’s luck started to change on Hole 12, though, as each disc golfer struggled playing the wind correctly. A poor tee shot left Walk with a bogie while Harbacheck and Schorn pared to create a three-way tie.

Those three, along with Moore, remained close the remainder of the round and dramatized the 18th hole.

“Once I took the lead I just held my ground,” Schorn said.

Entering the round’s last hole, Walk and Schorn were tied atop the leader board at one-under par and Harbacheck and Moore sat at even par.

After the tee shots, Moore missed his second shot, eliminating himself from contention, and Schorn, throwing out of woods, put his disc within five feet of the hole and in position to save par. Walk scored a routine par and Harbacheck sank a 40-foot putt to force the three man-playoff.

Scores for final four on Sunday:

Consolation round (for players who lost in first two rounds):