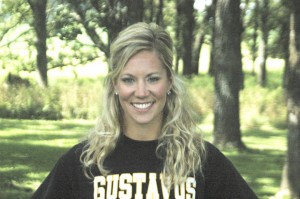 Dancing towards a fairytale ending

During the spring of her senior year at Albert Lea High School, Mariah McGill’s life was going just as planned.

She was two months away from graduating, having accepted and enrolled at Gustavus College in St. Peter.

She had recently finished her fourth year on the Albert Lea dance team, where she was a captain, choreographing the team’s routines, and was currently on vacation with her mom, a cruise in the Bahamas, which she was enjoying, save a bad sunburn on her neck.

She treated that sunburn like any other she’d ever had, with aloe, but this time was different.

As she rubbed lotion onto the right side of her neck, she noticed a hard lump right above her collar bone.

“I remember being kind of scared,” McGill said. “But I had no idea what it was.”

McGill’s mother, Karen, insisted she was fine, but a week after the two returned to Albert Lea, McGill visited the doctor.

At the Albert Lea Medical Center, she went in with a bad cold. The doctor called the lump a swollen lymph node and told her to keep an eye on it. She did, for two months, and it never went away. Then she made an appointment in Rochester.

McGill was exhausted. The once healthy 18-year-old had swollen lymph nodes throughout her body

and itchy legs, which she scratched until she bled.

In Rochester, she had an ultrasound, CT scan, PET scan and ultimately a biopsy. On senior skip day during her final year of high school McGill’s diagnosis came back — positive for stage-two Hodgkin’s Lymphoma.

“I thought I was dreaming,” said McGill, of the day she was diagnosed. “My initial reaction was ‘this can’t be happening to me.’”

McGill had made it through her senior year of dance without many symptoms. The cancer didn’t make her feel sick but chemotherapy would, and it threatened the dance career she hoped to have at Gustavus.

“The summer before college I was so weak I couldn’t do a lot of things,” McGill said. “I was worried I wouldn’t be able to dance.”

Back in Rochester, McGill began chemotherapy during the first week in June and received it every two weeks until mid-September.

McGill made it through a summer of chemotherapy unscathed and unafraid of dying.

“I was more worried about losing my hair than anything,” she said. “That’s selfish, but what I thought about more than getting sick.”

McGill never felt sick that summer and in August, three months after being diagnosed, a PET scan revealed she was cancer free.

Her battle with chemotherapy was just beginning, though, she needed two more rounds of treatment, and during her first year of college the side effects finally caught up with her.

“The whole thing was weird because I didn’t feel sick, I was just diagnosed,” McGill said. “Then I became sick when the cancer was gone.”

At school, McGill found it hard to focus, she was nauseous and had body aches. That’s when she turned back to dance.

“Dance was very healing,” she said. “An alternative type of medicine.”

“I had lost a lot of muscle,” McGill said. “So that really helped me get back into shape.”

McGill graduated from Gustavus College this spring with a major in nursing and minor in dance. She passed her nursing boards exam this summer and hopes to get a job either in an emergency room or intensive care unit.

In the meantime, she plans on taking dance classes in Rochester or the Twin Cities and dreams of spending a year dancing at a cruise ship or at Walt Disney World.