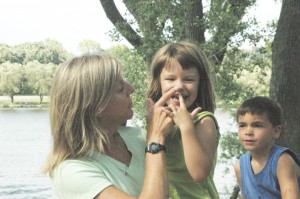 Making sure her daughter has a mom

When now four-year-old Alexis Jones’ biological mother put her up for adoption, she did so because she wanted her daughter to have two parents raising her. Tom and Nancy Jones of Albert Lea fit the bill nicely, and in 2006 adopted her along with a baby boy, Spencer.

All of that was put into jeopardy in July 2009 because doctors found “something in mommy’s tummy,” Alexis said.

That something was colon cancer.

Jones, 46, was an athlete. Born in Freeport, Ill., she ran track in high school just outside of Madison, Wis., and the heptathlon at the University of Wisconsin-La Crosse, a seven-event contest made up of running, jumping and throwing.

She had been healthy her entire life but was at-risk. He father had a large polyp removed from his colon when he was in his sixties.

When Jones was diagnosed, she didn’t fear for her life, but the lives of her children.

“The hardest part was having two 3-year-old kids,” she said. “I thought, ‘what if Alexis doesn’t have a mom to grow up with?’”

But the initial outlook was positive. The cancer hadn’t spread outside of her colon and chemotherapy wasn’t needed, though, she did have six inches of her colon surgically removed July 24.

“Fortunately,” Jones said. “That was all I had to do.”

After surgery, Jones made a plan to get back on her feet.

In six weeks she wanted to be running. She was, and by mid-September, just three months after her diagnosis, Jones was doing four-mile runs.

Jones, who teaches science and is the head girls’ track coach in Austin, has a background in Physical Education, and knew at what pace she could take her recovery.

The bout with cancer also changed her perspective on being active.

“Now I force myself to run in the morning,” Jones said. “I’ve become more dedicated to making sure I keep my fitness level up.”

In 1999, Jones ran the Chicago Marathon and ran in half marathons, often, when she taught in New Prague. After having not ran a half marathon is years, Jones ran the April Sorensen Memorial Half Marathon July 11, 2010, exactly one year and a day after being diagnosed with cancer.

“Hopefully I can make running the April Sorensen an annual thing,” Jones said. “It’s good to have races to keep you motivated to push on with your workouts once in a while.”

Now, 13 months after her diagnosis, Jones is cancer free.

She hopes running will keep her that way.

“Hopefully it will help prevent (cancer),” Jones said. “I think that being an athlete pushes me to go to the doctor sooner, too.”

In addition to running, Jones occasionally bikes, teaches jazzercise, strength trains and golfs with her husband, Tom, and two kids.