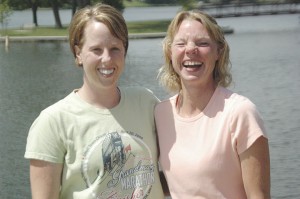 Tammy Willis and Kristy Ferris are best friends, running partners and have tackled nine marathons together. They’ve also both heard the same four frightening words: “you have skin cancer.”

The two met in 2002. Ferris had just moved to Albert Lea, a pharmacist, having recently graduated from the University of Nebraska Medical Center.

buy a treadmill and the two have been running together since.

Willis wasn’t active in high school, but began running when she was 19 to lose weight.

Ferris has been an athlete since she was a child. She ran cross country and played soccer from high school through college at Wayne State in Wayne, Neb. She began running half marathons while at pharmacy school in the early 2000s.

Both runners have been diagnosed with basal cell carcinoma, a highly curable form of skin cancer that requires an in-and-out surgery, removing the malignant cells.

Willis was diagnosed in 1997 and hasn’t had anything reoccur since.

Ferris, on the other hand, was given a more serious diagnosis.

Diagnosed with basal cell carcinoma June 17, Ferris went in for another check up with a dermatologist in July. The appointment was going well, and the doctor hadn’t found anything as Ferris was ready to get dressed.

“I said to the doctor, ‘oh yeah, did you see this one,’” Johnson said. “It was a mole darker than the rest. It came back as melanoma.”

“The doctor feels I am a genetic carrier of it,” said Ferris of melanoma.

The cancer diagnoses was shocking to both Willis and Ferris because, while they run every day, they do before the sun comes up, anytime between 3:30-4:30 a.m.

“I was overwhelmed,” Ferris said. “I don’t cry, but I cried. I couldn’t believe it because I’m not a sun worshiper.”

The two have been able to support each other while running.

“We just kept running,” said Willis of their battles with cancer.

“We talk about it but we don’t dwell on it,” Ferris added. “I rely on her a lot from her experience from it. I’m not looking for sympathy but I’ve relied on (Willis) more just sorting through it. She came to both my surgeries.”

Thursday morning, the day of Ferris’ most recent surgery, the two ran 16 miles together.

She’s off her feet for another two weeks and the pair can’t wait to get back on the pavement together.

The two will be taking on another adventure later this month.

“Life’s too short, might as well go skydiving,” Willis said. “Life goes on and you can’t stop what you enjoy.”