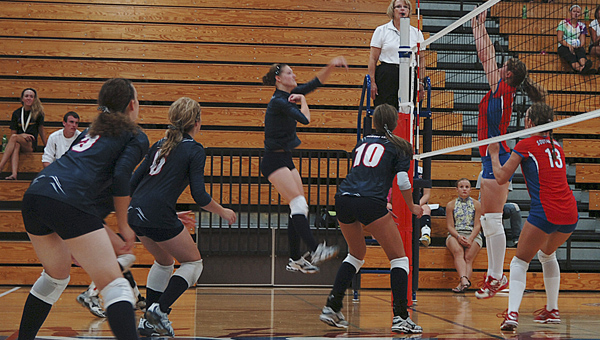 A Tigers player spikes the ball over the fingertips of a would-be blocker Monday. -- Andrew Dyrdal/Albert Lea Tribune

The Tigers volleyball team opened their season with a win Monday, beating Southland 3-1 in Albert Lea.

“Whenever I come into the first game of the season I’m not sure really what to expect,” Albert Lea head coach Jaime Mauseth said. “But (the team) met my expectations, especially in the first game.”

After an emotional win in the third game, the Tigers opened the fourth on a roll, building a 7-0 lead on Ladwig’s serve.

The Rebels staged a comeback, though, going on a 13-8 run, coming within two points at 15-13, and forced an Albert Lea timeout.

The Tigers then went on another run, extending their lead to 23-16 on strong serves from Hanson and Bethany Sekora. But Southland took one last stab at it.

The Rebels answered with a 6-0 run of their own, making the score 23-22 until Stoneking dropped a ball right over the net. The Tigers started to celebrate, but prematurely, the Rebels had dug the ball and sent it back over the net for a point, evening the score at 23.

“It’s all a mental thing,” Mauseth said of the Southland run. “I think when we’re up it’s really easy to stay up but once we start getting behind we start shutting down and it’s hard for us to come back. Southland came back on that run and almost got us in the end but we just pushed hard and pushed through and they showed a little bit of mental toughness.”

Albert Lea is in action again tonight in New Richland as they take on the Panthers at 7:30 p.m.