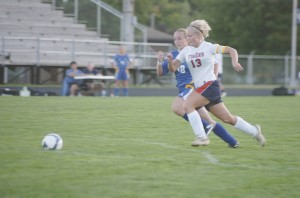 Before their season opener, the Albert Lea girls’ soccer team had won 39 consecutive regular season matches against section opponents since 2004. Friday night, they went for number 40.

Although the score didn’t reflect it, the Albert Lea girls’ soccer team dominated Waseca offensively in their  season opener Friday night, squeaking by the Bluejays 2-1.

Albert Lea had possession of the ball for most of the first half, putting up 23 shots on goal to Waseca’s four. The Tigers took a 1-0 lead to halftime but a defensive miscue in the second half allowed Waseca to tie and likely send the game to overtime.

With three minutes left in regulation, the senior forward who had been the most aggressive player on the field, was fouled in front of the goal.

The call was late, and Christensen raised her hands towards the referee before he acknowledged the call, but she was as calm as ever as she slipped the penalty kick low and to the left side of the net, under the diving goalkeeper, securing the milestone number 40.

The Tigers had chances to create separation early, getting many shots on goal before Waseca got their first opportunity over 10 minutes into the match, but couldn’t find the back of the net.

The Tigers finally did with just under five minutes before half.

The Tigers celebrated, but Waseca responded with three hard shots on goal in the half’s final 30 seconds that were all blocked by Albert Lea’s defense.

The second half started just as the first had, with aggressive attacking by Christensen and the rest of the Tigers’ strikers.

The game settled into a slow, methodic groove, though, and with just under 12 minutes left in the match, Waseca’s Dana Sopkowiak sent the ball into a mostly unguarded net.

“We had a bit of a hiccup there,” Barnhill said. “To (Waseca’s) credit, they stormed in on their back post and finished it off.”

The Tigers had two open shots on goal in the final 10 minutes before Christensen ultimately won the game on a penalty kick.

“The bottom line is we found a way to win in the first game with a brand new team,” Barnhill said. “I really think if Ariel would have finished off a couple of those chances and gave us some separation we would have settled down a little more.”

But this wasn’t the same Bluejays team the Tigers beat 4-0 last season.

“Waseca looks like a much improved team,” Barnhill said. “I think they’re going to surprise some people. For us it was a very good test — it looked a little bit at times like a first game.”

Albert Lea held possession of the ball for 58 of 80 minutes and had 51 shots on goal to Waseca’s 13. The Tigers also had seven corner kicks to Waseca’s one.