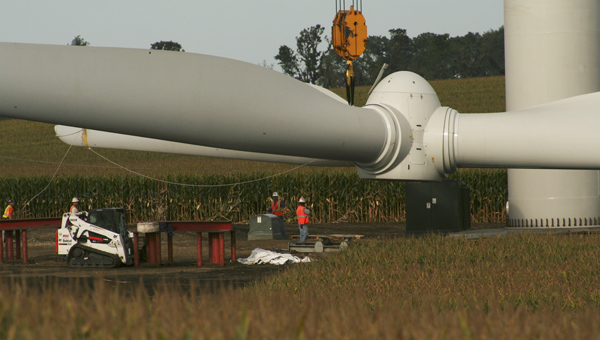 MANCHESTER — Despite the unsteady weather conditions and other minor setbacks this summer, semis and pickup trucks buzz around the Manchester and Hartland area to continue Alliant Energy’s Bent Tree Wind Farm construction. 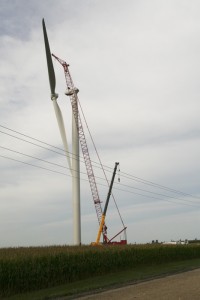 Alliant Energy contracted with Barnhart Crane to erect the towers. More than 120 wind turbines are expected to be erected by November. -- Ashley Stewart/Albert Lea Tribune

As of Tuesday morning, seven wind turbines were completely erected by contractor Barnhart Crane & Rigging, and three more were expected to be completed, wind permitting.

“It’s dangerous to fly the rotor to the top of the turbine tower by crane if winds are stronger than 25 mph,” said Alliant Energy Safety Manager Tom Moravec. 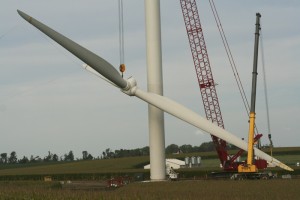 Two cranes lift the wind turbine’s rotor to its nacelle west of Manchester Tuesday. It takes about seven people to complete the placing of the rotor at the top of each tower. Each tower when fully erected is about 400 feet tall. -- Ashley Stewart/Albert Lea Tribune

The rotor-placing process takes about seven Barnhart crew members and two cranes; one to lift the rotor and the other is used as a tailing rig to maintain control of the piece. The placing of the rotor takes about 15 minutes, said Moravec.

Each wind-turbine rotor contains three 131-foot blades and weighs approximately 90,000 pounds. The attaching of the rotor onto the 104,000 pound nacelle is the last step in the three-day turbine erection process. 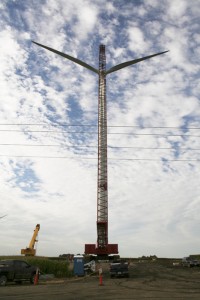 The wind turbines consist of seven parts. The base, lower middle, upper middle and top pieces amounting to more than 350,000 pounds. Once the 400-feet tall wind turbines are erected, the detailed work inside the towers begins, Alliant Energy Safety Supervisor Tim Hightower said.

“Building a wind farm is a lot like building a house because it looks easy when you’re laying the foundation and putting up the shell, but you still have to put the trim in the house,” Hightower said.“The tedious work is yet to come.”

The turbines are Vestas V82, generating 1.65 megawatts. This wind farm project will amount to 200 megawatts, which can power approximately 50,000 homes.

Anyone with questions about the project is encouraged to call Alliant Energy at 800-545-3122.