Grant and Becky Lohse of Albert Lea announce the marriage of their daughter, Leah Lohse to Daniel Bender, son of Arthur and Marion Bender of Pittsburgh, Pa.
Leah and Daniel were united in marriage at 7 p.m. on June 25, 2010, at Hebron United Presbyterian Church in Pittsburgh. The Rev. Lee Freshour of Albert Lea and Rev. Tim Williams of Pittsburgh performed the double-ring ceremony. 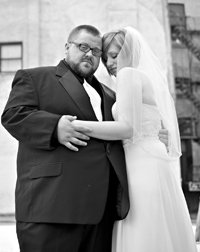