Cher Elizabeth Olson and Cody Heilman Habana were married May 20, 2010, at sunset in Maui, Hawaii. The Rev. Vance Rosete performed the Hawaiian ceremony. Music at the ceremony was by Kalani.

The bride is the daughter of Lewis Olson of Albert Lea and the late Janet Olson. 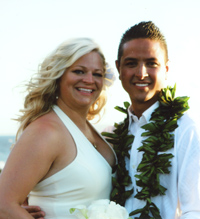 The groom is the son of Peter “Bud” and Roxanne Habana of Albert Lea.

Olson is a registerd nurse at Albert Lea Medical Center in med/surg.

Habana has a bachelor’s in business administration and is employed at Plaza Landscaping.

After finishing out the week on their honeymoon in Maui, the couple resides in Albert Lea.