Wind farm a bit behind 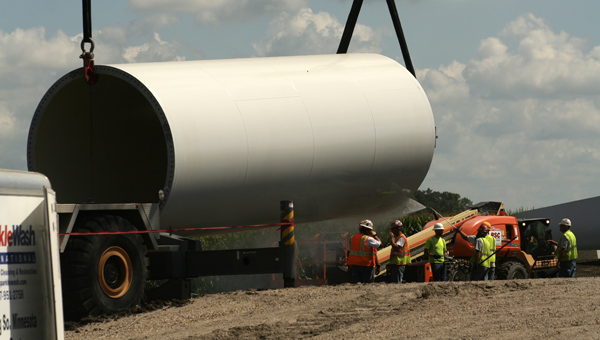 An employee with Dexter-based Sparkle Wash International on Thursday sprays a cyclinder that will become part of a wind turbine’s tower. -- Tim Engstrom/Albert Lea Tribune

MANCHESTER — The landscape in the Manchester and Hartland area was changed forever in June as a result of tornadoes. It’s changing again this month as a result of wind turbines being constructed.

Despite the rainy weather, project directors still plan to complete the project by March of next year. 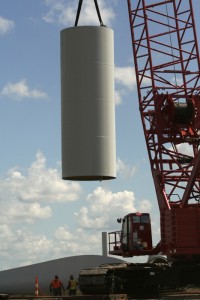 Francois is the director for the Bent Tree Wind Farm for Alliant Energy. The project is a little behind schedule but workers have started to assemble the nearly 400-foot towers. Anytime there is lightning within 30 miles, work has to stop because of safety issues, Francois said. As of this week, four complete turbines have been delivered, and there are currently more than 300 workers in the project area.

“We’ve had a few setbacks and we think we can overcome this,” Francois said. “We can still meet our deadline.” 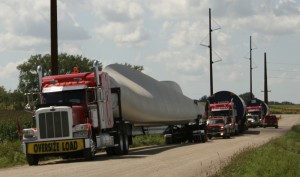 Three semis, two hauling tower sections and one a turbine blade, wait for instructions Thursday on 263rd Street northeast of Manchester. Pilot car drivers have remotes that can steer the rear axles so the long trailers can make corners. -- Tim Engstrom/Albert Lea Tribune

Two tower bases have been set. The bases are 74 feet tall and weigh more than 100,000 pounds. The next steps to building the turbine are to add the lower middle, upper middle and top pieces. After that the nacelle is attached and then the rotor and three 131-foot blades will be added to each turbine.

Two main cranes are used to erect the turbines, as well as smaller cranes that assist. Almost all the access roads are completed, about 104 of 122. 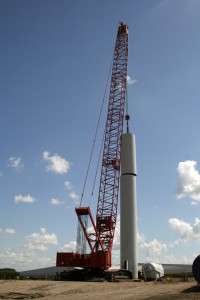 Concrete has been poured for 83 bases and 79 pedestals. About 68 of these sites have been backfilled, which means they’re ready for a crane pad. About 51 of the sites have the crane pad completed and are ready for turbine parts to be added. One resident living across the street from the two turbines being built said it’s definitely a change in the landscape.

“It’s entertaining to watch them build them,” Terry Gjersvik said. “It’s been really busy around here.”

He said it’s fun just to see how big the cranes are that hoist the pieces into the air, and that everyone needs to be considering alternative kinds of energy. 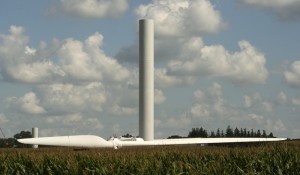 Turbine blades lie on amid a corn field west of Manchester. Many people say it was a good thing they weren’t there when tornadoes struck in June. -- Tim Engstrom/Albert Lea Tribune

The transmission line leading from the substation on County Road 29 and Highway 13 has completed the 15 steel-pole foundations and all 49 poles are set. Wire stringing along this line has started. About four miles from the Bent Tree substation off County Road 25 ITC Midwest’s substation is being built, which is where the power will connect to the grid.

Alliant Energy is investing more than $400 million in the first phase of this project.

The project will have positive influences on the community as well, he said. While the project is being built, it will bring about $40 million directly and indirectly to the community, as well as the taxes they will pay each year after the building is done, Francois said.

The turbines are Vestas V82 and 1.65 megawatts. This wind farm project will amount to 200 megawatts, which can power approximately 50,000 homes. The total weight of each turbine is more than 350,000 pounds. There will be 26 miles of access roads built in the county.

The second phase — another 200 megawatts — has no start date yet as they are waiting for approval from Minnesota and Wisconsin. Anyone with questions about the project is encouraged to call Alliant Energy at 800-545-3122.