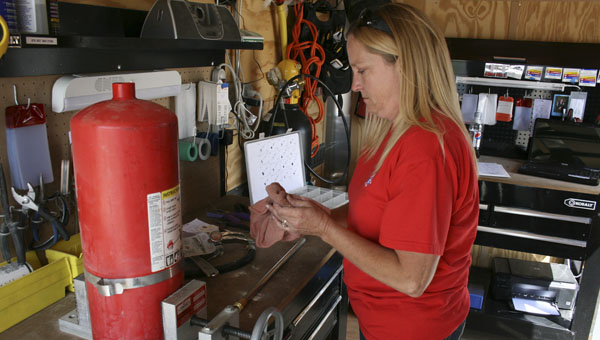 Janet Hunt works on refurbishing a fire extinguisher in her work trailer. She uses special tools to refill the tanks after they have been used. -- Kelli Lageson/Albert Lea Tribune

One woman in Albert Lea is doing her part to make sure that safety equipment is in good working order so that it can keep people safe.

Janet Hunt and her husband, Randy, own Interstate Fire & Safety in Albert Lea. She has been busy training and attaining certification for all the products she maintains, installs and repairs. 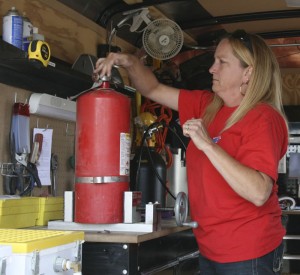 Hunt has had businesses contact her to service fire extinguishers or to acquire other products like smoke or carbon monoxide detectors. She also makes calls to businesses because many times people don’t know how often fire extinguishers should be checked. Hunt has also been working with many of the contractors at the Bent Tree Wind Farm to help with eye-wash stations, to furnish safety gear or to work on fire extinguishers.

“I’m up there a couple times a week,” Hunt said.

While she does many different things, working on fire extinguishers is one of the most common things she does. Hunt recommends extinguishers be checked annually by someone certified to fix them and monthly by the owners. The monthly check includes looking at the valves and tapping the bottom of the cylinder to break up the chemicals.

After six years, extinguishers should be emptied and have the valves and chemicals replaced. After 12 years extinguishers must have a hydrostatic test, which tests the cylinder to make sure it’s still usable.

“A lot of people think we’re just fixing fire extinguishers, but it’s so much more than that,” Hunt said.

Hunt can service fire departments in the area and currently works with the Hartland Fire Department. She said she doesn’t mind working around firefighters’ schedules and often does maintenance during their nighttime meetings.

“We want to go to them at their convenience,” Hunt said.

Hunt has a trailer filled with many of the things she needs to service equipment, which means she’s completely mobile. Hunt would like to have a store someday where she could stock all the products she sells.

Hunt said she enjoys working with people to make sure any safety equipment they have is working and said having a working fire extinguisher can be the cheapest insurance policy against fires. She also thinks it’s important for the community to be educated about extinguishers and other equipment. She had a booth at the Freeborn County Fair and will be doing a presentation for some area Cub Scouts. In the next year she’d like to have a workshop so she can help people learn about their fire extinguishers. Interstate Fire & Safety can be reached at 507-369-2186.