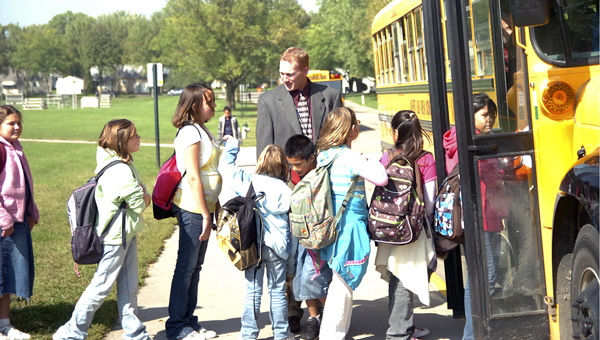 Matt Esterby says goodbye to Halverson Elementary School students as they board the bus after school Monday. Esterby is in his first year as principal of Halverson. -- Andrew Dyrdal/Albert Lea Tribune

Matt Esterby moved to Albert Lea this summer to do two things — raise a family and improve education on Albert Lea’s south side. He began doing the latter on Sept. 7 as he greeted Halverson Elementary School students as they got off the bus for their first day of school.

It was Esterby’s first day, too.

Esterby moved to Albert Lea on June 28 to fill the vacant principal position at Halverson left by Del Stein. He brought with him his wife, Erika, 35, and sons Kyan, 4, and Kasen, 2.

Before Albert Lea, Esterby had spent the past eight years in the Bloomington School District, once as a third-grade teacher, but most recently as dean of students at Washburn Elementary School. 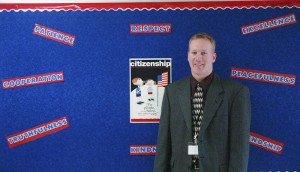 Halverson Elementary School principal Matt Esterby stands next to the citizenship board in the entrance of Halverson. The words on the board reflect what Esterby hopes his students learn this school year. -- Andrew Dyrdal/Albert Lea Tribune

Before assuming that first administrative position, Esterby taught for exactly a decade, with his first four years at North Trail Elementary School in Farmington, after graduating from Mankato State University in 1998 with a degree in elementary education.

He made the move to administration because of his past success at helping a wide range of people.

“There’s a bigger capacity to be able to help students learn,” Esterby said. “Principalship was the ideal position for me because I still get to have contact with the kids on a daily basis, but my primary responsibility is to help people reflect on their teaching.”

As a teacher, Esterby had a lot of success in the classroom with student achievement and was given the chance to teach others.

Esterby knew there was a tradeoff in administration, though. More time with teachers and parents meant less time with students.

“The tradeoff between being able to help more students and losing that intimacy was a tradeoff I was willing to negotiate,” Esterby said. “The students I’ve identified really well with were ones that were struggling. I knew that as a principal I’d have the opportunity to work with them still.”

But Esterby tries to identify with all of his students every morning, at lunch and after school by simply spending time with them.

He greets them at 8 a.m. when they arrive at school and sits with them in the cafeteria during lunch. At the end of the day, he walks students to their buses and says goodbye to as many as he can before they board and head home.

“I sit down and have a conversation with them,” Esterby said. “I don’t mind cleaning the tables with them so they see we’re part of the same team.”

Esterby said his main goal is to make the school as welcoming as possible, especially since it’s on the south side of town and not everyone is familiar with it.

He already sees progress because over 500 people have said they would attend a community picnic at Halverson held this week.

Esterby is excited about raising his family in Albert Lea because although he has spent the last 12 years in the Twin Cities, he grew up on a small dairy farm in the Kenyon-Wanamingo area, and is comfortable with the area.

“We were looking for a good place to raise our kids,” Esterby said of his decision to relocate to Albert Lea.

Since moving to Albert Lea, Esterby has stayed active by golfing and hopes to join a co-ed volleyball team next year with his wife.