‘We’re trying to hit a niche’ 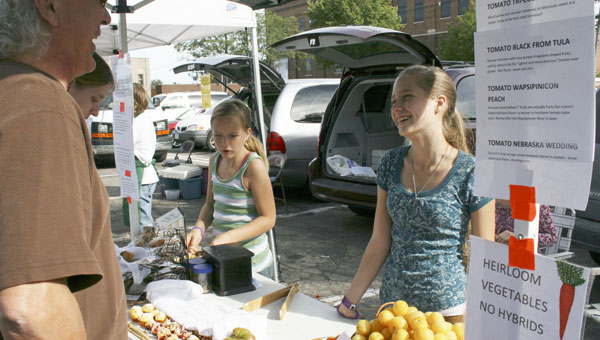 Adeline Wagner, 15, right, laughs with customer Rick Mammel Wednesday at the Albert Lea Farmers Market. This is the first year for Adeline and her mother and sister to operate their stand, Adel’s Unique, at the farmers market. They sell gluten- and dairy-free products, along with heirloom vegetable varieties. -- Sarah Stultz/Albert Lea Tribune

With bright orange and yellow tomatoes and gluten- and dairy-free products, the Al and Shari Wagner family is trying to hit a niche at the Albert Lea Farmers Market.

Shari and her daughters, Adeline and Elizabeth, started a booth called Adel’s Unique at the market this year. They are first-time local market vendors, selling heirloom varieties of tomatoes, other vegetables and their homemade gluten- and dairy-free breads and cookies.

The vegetables are all from their chemical-free garden.

“Everybody has baked goods; everybody has vegetables,” said. Shari, of rural Hayward “We’re trying to hit a niche.”

It’s growing a little at a time.

She said her family is the only farmers market vendor in Albert Lea with Nebraska wedding tomatoes. These tomatoes are bright orange in color and are low in acid. They also sell black from Tula tomatoes, which are rosy purple irregularly shaped tomatoes that some say are the ugliest but most delicious tomatoes, she said.

Regarding their baked goods, Shari said the family is trying to make gluten-free items that taste better than what can be found in stores. People who came by the Adel’s Unique booth and tested a free sample on Wednesday walked away telling the Wagners how delicious the food was.

Shari said there are more and more people who need gluten- or dairy-free produce.

She encouraged people to try out the foods, as she and her family have seen health improvements from eating these foods instead of other foods.

In line with promoting healthy living at the family’s booth on Wednesday, she and the girls were also handing out a flyer advertising a special presentation they are hosting on Saturday titled “Nourishing Our Children” at the First Presbyterian Church. To find out more information, see the accompanying sidebar with this story.

In addition to selling produce and baked goods, the Wagners are selling homemade hats, scarves, bookmarks and cards made by the girls.

“It’s a good experience for them to be entrepreneurs,” Shari said of the whole experience, noting that Adeline had a booth for a few weeks through 4-H in 2009.

Shari noted the family will more than likely be returning to the market next year.

Albert Lea Farmers Market organizer Verlys Huntley said the Wagners are one of about 47 vendors this year at the farmers market.

“I think it’s going very well,” Huntley said. “We’ve got more vendors and we’ve had good weather on most of the days of the market.”

The market runs from 4 to 6 p.m. Wednesdays and from 9 a.m. to noon Saturdays through the end of October in the North Broadway Avenue parking lot.