Tigers fall to Falcons (with video) 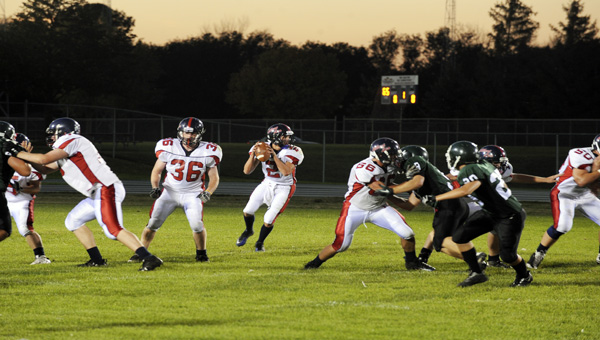 FARIBAULT — The Albert Lea Tigers and Faribault Falcons exchanged big plays for most of the first half Monday, until Faribault’s Anthony Gustafson opened the floodgates for the Falcons.

With the teams knotted a 14-14, Gustafson — who Albert Lea head coach Clay Anderson called the fastest player in the conference — broke a 58-yard touchdown run two minutes and 22 seconds before halftime, putting the Falcons (3-1) ahead for good, en route to a 42-21 win.

“(Faribault) won the line of scrimmage battle,” Anderson said. “They put pressure on the quarterback when they needed to and we didn’t match their physicality.”

The Tigers (1-3) scored first when quarterback Kyle Kriewall ran the ball down the Falcons’ sideline 79 yards to the Faribault three-yard line. Dillon Stolt plowed into the end zone on the next play, putting the Tigers up 7-0, early.

But that was the only lead they held.

The Falcons responded on the very next drive as they rushed for 37 yards on the first play. After two first downs, quarterback Jake Salaba connected with Jack Helgeson for a 21-yard touchdown pass, evening the score 7-7.

After the two teams exchanged punts, Albert Lea put a 12-play series together, as Kriewall connected with Aaron Klatt twice for 10 and 23 yards, Cameron Solie for 25 yards and finally Dalton Westerlund for five yards a touchdown — tying the game at 14-14 — before Gustafson put the Falcons up 21-14.

It didn’t take long for the Falcons to run away with the game in the second half, though.

Saul Garza extended Faribault’s lead to 28-14 on a two-yard run early in the second half, and Mat Becker intercepted Kriewall less than three minutes later and returned it 10 yards into the end zone to make it 35-14. 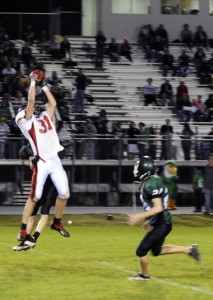 The Falcons capped off a 28-0 run with 1:24 left in the third quarter, after Salba and Gustafson connected for 79 yards on two receptions and Schultz scored from six yards out to push the lead to 42-14.

Albert Lea has a short week to prepare for Rochester Century — a team they beat last season — who’s established themselves as one of the top teams in the Big Nine Conference.

“It’s a different year,” Anderson said of his matchup with the Panthers. “We’ll just prepare and hopefully play well.”