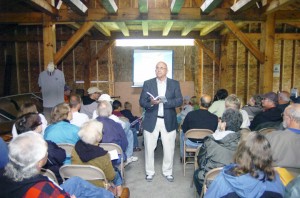 Around 70 people huddled into the Brookside Community Boathouse Saturday morning, for its grand opening at Brookside Park.

Sheltered from the rain, visitors heard stories from Gary Hoffman, an Albert Lea native, as he chronicled his experience canoeing the Mississippi River with his son. 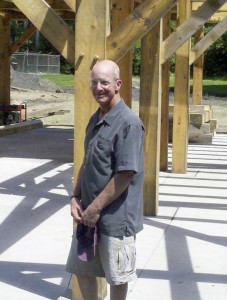 Kenny Perkins, of Albert Lea, stands next to the timber he donated to Community Education. -- Andrew Dyrdal

Before Hoffman spoke, Community Education director Chris Chalmers honored Kenny Perkins, of Albert Lea, for his donation of all the timber used on the boathouse — 40,000 pounds of Eastern white pine bought from a mill on the Gunflint Trail, worth $100,000.

Perkins had originally planned to use the timber to build a home, but scrapped the plans due to personal reasons. After no longer wanting to store the timber, he decided to donate the wood he had spent over four years cutting and jointing.

“I wanted to finish it,” Perkins said of his plans with the timber. “I wanted to see it go up.”

The boathouse wouldn’t stand today if it weren’t for that donation.

“No donation was more significant than the other,” Chalmers said. “Except the timber that got the idea started.”

The boathouse was built entirely on donations and volunteer efforts. At the opening ceremony, wooden pegs were given to people who donated time or resources, the same pegs that support the 40,000 pounds of timber.

“About a month ago we couldn’t have had an environmental event because we didn’t have a facility,” Chalmers said. “Now we have somewhere we can bring teachers in and hold classes inside.”

Chalmers hopes the building becomes a truly environmental space, powered by alternative energy. He said Riverland Community College electrical students may eventually install solar and wind energy systems. He plans on hiring part time instructors to lead classes in canoeing, kayaking, stand up paddleboarding, geocaching and archery, along with rear doors for the boathouse and reclaimed barn wood for the building’s interior.

After a brief time for chatting, visitors brought cookies and hot cider indoors to listen to Hoffman read excerpts from his book, titled “Mighty Miss: A Mississippi River Experience.”

With his 20-foot canoe resting against a pile of scrap wood, spoke about almost dying in Fountain Lake as a sophomore in high school. He then went on to talk about near-death experiences on the Mississippi River, accompanied by a sideshow of photos.

After Hoffman concluded with a short question and answer session, Chalmers added that with the construction of the boathouse, he hopes someday another Albert Lea native will return to speak about their outdoor adventures.