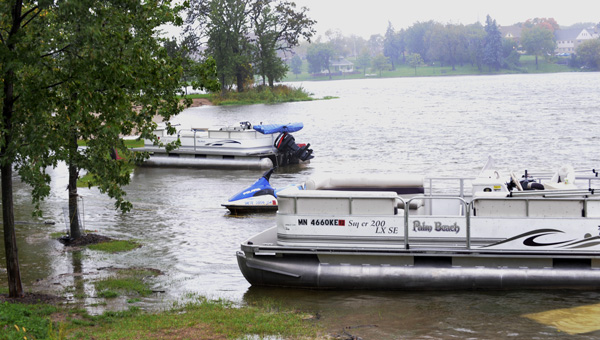 Pontoons and a personal watercraft gathered from high waters of Fountain Lake rest on the shore of City Beach on Thursday. -- Andrew Dyrdal/Albert Lea Tribune

Albert Lea city crews operated between 10 and 15 pumps throughout the city Thursday to alleviate an overloaded sewer system because of heavy rains.

City Engineer Steven Jahnke said as of noon Thursday the wastewater treatment plant had measured more than 5 inches of rain in Albert Lea since the storm system began Wednesday night. 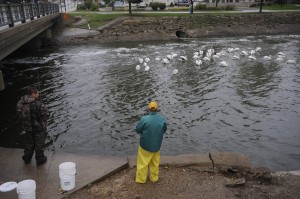 Pelicans gather on the channel below the Fountain Lake dam to fish on Thursday in Albert Lea. Gordon Bokman, left, and Eric Thomas fish, too. -- Tim Engstrom/Albert Lea Tribune

Pumps were placed on the lines where the sewers were bottlenecked and as of the afternoon, Jahnke said crews were starting to get caught up.

If pumps were not brought in, the sanitary sewer would back up into peoples’ basements, he said.

That would include things such as washing clothes and taking showers, among other uses, Jahnke said.

He noted the city will issue an update on limiting water use Friday morning.