The funeral service of Albert H. Ohm of Albert Lea, will be held at 2 p.m. Saturday at the First Lutheran Church in Albert Lea.

The Rev. Dan Baker will officiate. Interment will be in Concordia Lutheran Cemetery, Pickerel Lake. Visitation will be from 5 to 7 p.m. on Friday at Bonnerup Funeral Service, Albert Lea, and one hour before the service at the church. 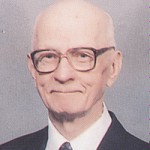 He attended Conger School District No. 140.

He lived and farmed on the home farm until 1966 when he moved to a farm nearby and continued farming until retiring in 1993.

In his later years he made his home at “Just Like Home Place,” he so appreciated all the special care he received there.

Albert was a hard worker, but always enjoyed a good game of cards and bingo.

He was preceded in death by his parents, his wife, Grace, his sisters Alma Richter and Marie Richter and a nephew, Dean Richter.

Albert will be fondly remembered for his kind, gentle manner and his willingness to express appreciation for everything that was given and done for him.