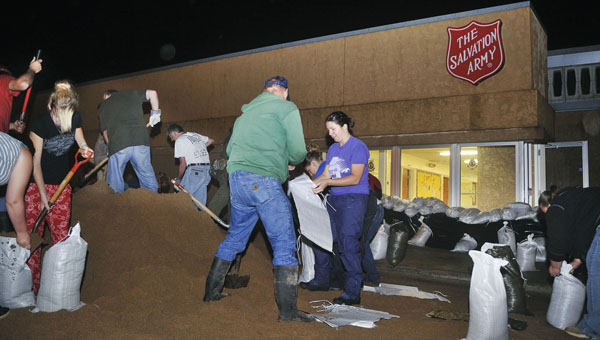 AUSTIN — Although the rains have stopped, Austin residents may be affected by the flood for several weeks to come. Many businesses and homes were left with little to no damage, however. Several homes along Turtle Creek had their backyards flooded Friday afternoon.

According to Police Chief Brian Krueger, several apartments in the area of the 1200 block of Second Drive NE were in danger of possible flood damage. Krueger said police suggested that residents living in those apartments evacuate on Thursday night, but the evacuation call was just a suggestion. Only a handful of homes around the community were significantly damaged by Thursday and Friday’s flood.

“There was a family that needed assistance,” said Elaine Hansen, executive director of the Mower County Red Cross. According to Hansen, the family’s home, in the Wild Woods Park neighborhood near Hormel Corporate Office was flooded out. The family has been put up in a motel. MCRC opened a relief shelter at St. Olaf Lutheran Church Friday morning as well. Only six people total went to the shelter, however, all arriving after noon, and the shelter was waiting for official word to shut down operations by 3:45 p.m., according to Red Cross workers there.

Many people watched and took pictures of the Cedar River, Turtle Creek and other overflowing bodies of water during the day Friday. Area businesses were largely unaffected, although several, such as Stuttgard Tan & Travel and Sinclair gas station on E. Oakland Avenue were flooded.

Rich Jaachs, president of Community National Bank, said workers from other locations traveled to Austin to help sandbag starting at 6:30 a.m. Jaachs, who became president earlier in the week, said he wasn’t able to get up to the Austin location until 10:30 a.m. The water on N. Main Street had crested by 11 a.m.

Melissa Miskovich watched the water overtake the parking lot at Riverside Arena when she tried to go to work Friday Morning.

Miscovich, the general manager of Business Operations for the Austin Bruins, said she was surprised to see the parking lot as flooded as it was, since volunteers had sandbagged the arena starting at noon yesterday.

“I said, ‘There’s whitecaps in our parking lot,’” Miscovich said.

According to her, Riverside staff worked from home Friday. Aside from the everyday calls police usually received, Krueger said Austin police had to deal with a large number of calls about people moving barricades or kids playing in flooded areas. Austin Public Schools had closed schools Friday, citing inclement weather and flooding conditions.

One woman drove her car into a flooded stretch of road on Hormel Century Parkway at about 12:25 p.m. Friday. She was eventually escorted to dry land by police. The woman was uninjured, according to Lt. John Mueller, who went on to say that her car, which stopped working after it was submerged, will remain in the street until the water is low enough to tow it.

Despite the lack of significant damage to businesses and homes, residents will be left with a reminder of how flood prone Austin can be for days to come.