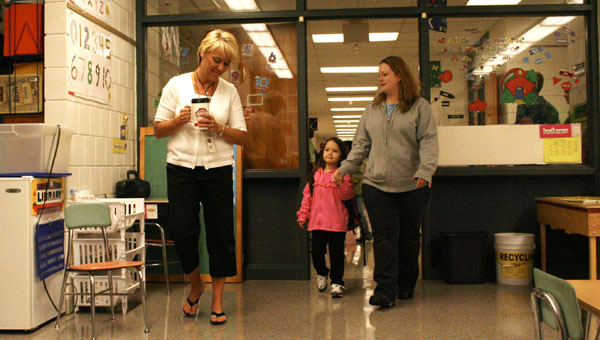 The first day of school is upon Albert Lea again, which means children are packing up their shiny new school supplies and heading to school to grow, learn and prosper.

Halverson Elementary School fourth-grader Mariah Bennett said she had a good summer and had gone on vacation and stayed at her grandmother’s. She also said she was in dance and was excited about some of the subjects she will study this year. 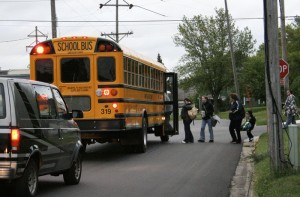 Students big and small climb aboard a school bus today at the corner of Front Street and Madison Avenue in Albert Lea. -- Tim Engstrom/Albert Lea Tribune

New at Halverson is Principal Matt Esterby, who is from Bloomington. He said he, his wife, and their two boys have moved to Albert Lea and have felt very welcomed.

Esterby said his goals for this year include building relationships with the other educators at Halverson and in the district, which he said has been easy so far because people have been friendly. He plans on promoting team sports because they promote conflict resolution. Esterby also said that the former principal, Del Stein, had been gracious while working with him this summer.

Halverson third-grade teachers Marcia Hoffman and Rhonda Schmidt said they were excited about working with a new principal and about the new school year.

“I’m looking forward to getting to know the kids and seeing their growth and progress,” Schmidt said. 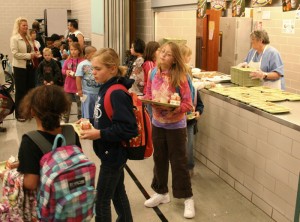 Leah Bergerson, wearing a red backpack, and Gabrielle Ronnenberg, in a tie-dye pink sweatshirt, carry their breakfast on trays today in a line at the cafeteria at Halverson Elementary School. -- Tim Engstrom/Albert Lea Tribune

Superintendent Mike Funk said there hasn’t been much change in enrollment numbers since last year. He said he has three goals he’s focused on for the 2010-11 school year. The goals are to increase opportunity and achievement for students, have safe, healthy and welcoming schools, and have efficient and effective operations. He said having efficient operations is even more important this year because of tighter budgets.

“We’re going to be much more focused on professional development throughout the year,” Funk said.

Instead of meeting with faculty a few times throughout the year to discuss district goals, the goals will become part of weekly teacher meetings called professional learning communities. With principals, the teachers will talk about district goals and work together to achieve them.

To make operations more efficient and effective the district has acquired more modern school finance software and is studying various student management systems that keep track of student data. Funk said the schools will continue with instant alerts in voicemail and text message form. The district also has plans for the students who didn’t make Annual Yearly Progress goals.

“Administration and teachers have sat down and really taken a hard look at the data,” Funk said. “We’ve gone through five years of data and taken a serious look at how we’re teaching.” 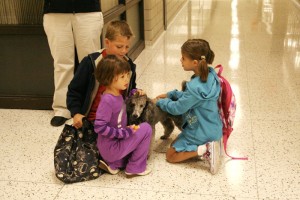 Matthew Santee and his sisters, Elizabeth, left, and Jessica, pet a poodle named Cruiser Howe at Halverson Elementary School this morning while social worker Teri Nelson stands behind them. The dog is there as a therapy pet. -- Tim Engstrom/Albert Lea Tribune

New things in the schools this year include healthy snack carts in all the elementary schools. These snack carts were purchased with the help of the Statewide Health Improvement Program. Also, the community garden at Halverson is flourishing and will be something students there get to enjoy and experience.

As for the school board, Funk said its members will work on one issue in September. Three of the four elementary schools are at or above capacity while the high school is 300 students under capacity.

“This fall we’re going to make a decision on what we want to do,” Funk said.

He also said there will be community meetings so residents can give input and learn more about the plans. There is a good chance that some grades will be moved to other buildings to accommodate the differences in class sizes.

There haven’t been many changes to the number of faculty members in the school district for the new school year. Funk said the district was able to tentatively hire two teachers to help ease some of the crowding in elementary schools. The district may be able to do this with the proposed funding from the Education Jobs and Medicaid Assistance Act. Through this the Albert Lea School District is set to receive more than $700,000.

During the first week of school uniformed officers will be at each elementary school to help people get used to traffic patterns.