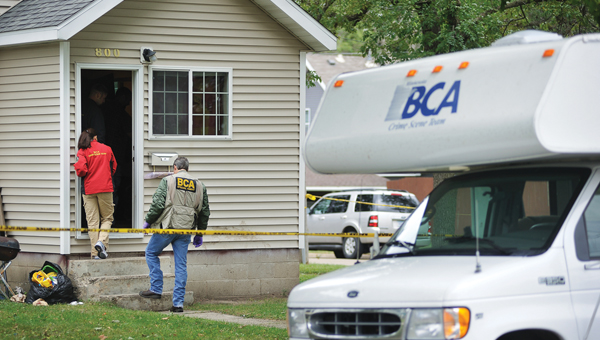 Investigators with the Minnesota Bureau of Criminal Apprehension enter a house in the 800 block of 10th Avenue NW Friday morning, the scene of an investigation into the death of 19-year-old Ardis Keith Parker. -- Eric Johnson/Albert Lea Tribune

The Minnesota Bureau of Criminal Apprehension is currently investigating the death of a 19-year-old at an Austin home.

The home, located at 800 10th Ave. NW, is taped off and several people are being questioned by police relating to the investigation to the death of Ardis Keith Parker, who died early Thursday morning at Austin Medical Center.

Parker, a resident of Austin, was taken by an unnamed person to AMC early Thursday morning. Parker was alive when he arrived at the hospital.

Austin Police Department was called to AMC at around 12:05 a.m. Sept. 2 in response to the death.

Police Chief Brian Krueger would not say Friday whether or not Parker lived at the home that is under investigation.

“I have no further comment at this time,” Krueger said Friday morning.

The home has been taped off since early Thursday morning, when the investigation began. No one is currently in the home, aside from two pit bulls in the basement, Krueger said.

The BCA will be at the home today to process the scene.

Krueger said the investigation is expected to be completed at some point next week.