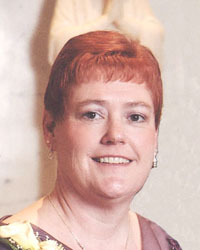 Carol died Tuesday, Aug. 31, 2010, at the Albert Lea Medical Center after a courageous battle from oral cancer. She was 54 years old.

Carol was born Aug. 18, 1956, in Williston, N.D., to Philip H. and Veda J. (Moreland) Perhus. She has been a lifetime Albert Lea resident, graduating from Albert Lea High School in 1974 and then Riverland Technical College with an associate degree in nursing. Carol married Robert Hanson on June 30, 1973, at Trinity Lutheran Church, Albert Lea. She worked as an licensed pracitcal nurse at Austin Medical Center for over 13 years and was also a sales representative for Lia Sophia Jewelry. She had been active in the Elks Club and Moose Lodge. Carol enjoyed NASCAR racing, traveling and going on cruises. Carol was a very social person and liked being with friends. Carol especially enjoyed being with her husband, children, grandchildren and great-grandchild.