Funeral services for Charles D. (Chuck) Boyer, of Clarks Grove, will be held at 11 a.m. Wednesday at St Theodore Catholic Church in Albert Lea. The Rev. James Berning and Deacon Mike Ellis will officiate. Visitation will be held today from 5 until 7 p.m. at the Bonnerup Funeral Service and one hour prior to the service at the church. Interment will be in St Theodore Catholic Cemetery. Military honors will be accorded by the Albert Lea Area Veterans Groups. 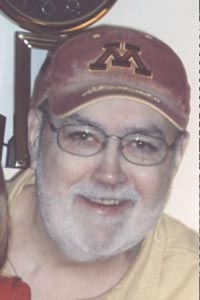 Charles died Sunday morning at his home in Clarks Grove after a courageous eight year battle with cancer. He was 64 years of age.

Chuck was born July 18, 1946, in Albert Lea, the son of Charles M. and Ellen Mae (Leidal) Boyer. He graduated from Albert Lea High School and attended Mankato State University and Albert Lea Technical College. Charles lived most of his life in Freeborn County and was a member of St Theodore Catholic Church. He had been employed early in life at the Wilson Co. then with Land-O-Lakes and Streaters. Most recently he had been with the Gopher Stop in Clarks Grove.

Charles served his country in the US Army from 1967 until 1971 as a Communications Security Specialist: Army Security Agency (Security Clearance: Top Secret Crypto) and had been stationed in Germany.

Chuck lived for and participated in sports. He played golf and softball and even tried his hand at curling. Chuck enjoyed high school wrestling, was active in Fantasy Football and enjoyed putting together the pools for college basketball tournaments.

Charles was preceded in death by his father, Charles M. Boyer, and brother, Tom Boyer.

Special thanks to the hospice workers and all of his friends who cared so passionately for him.

Memorials in lieu of flowers to the Crossroads Community Hospice.