“Everything is nearly copacetic. I’m on a diet. I’m trying to avoid making pie contact, but I drank a bottle of maple syrup this morning so I’d be ready if I came across some pancakes.”

“It’s hard to believe we slept in the same study hall,” I say.

“Yesterday, I was on my way to the bank to beg for money to support my farming habit, when a woman passed me as if I were backing up. She was driving a Lexus and her face was pressed to the rearview mirror, applying her eyeliner. She swerved back into my lane. She was still putting on her makeup. She made me as jumpy as a chauffeur on a pogo stick. I’m a man who doesn’t scare easily, but she frightened me so much that I dropped my electric shaver, which knocked the glazed doughnut out of my other hand. I touched the brakes while maneuvering the car with my knees against the steering wheel and that knocked my cell phone from between my ear and my shoulder. The phone fell into the coffee cup I had between my legs. The coffee splashed and burned my leg, ruined the phone, soaked my trousers, and disconnected an important call to a pizza place. Women drivers!”

I looked at the sunflowers. There were many beautiful flower heads. As I watched, one of the flowers flew away. It was an American goldfinch. To see a flower fly is a gift given only to the very young, the extremely fortunate and the eccentric.

A common sound of fall comes from in the woods. “Cheep, cheep, cheep, cheep,” and “Chuck, chuck, chuck, chuck.” It continues for long periods without stop. Take a gander at a log, rock or stump and you will likely see the singer. It’s a chipmunk. The sound carries better when the trees are freed of leaves. The chipmunk takes a break from stuffing its cheek pouches with foodstuffs in order to chime in on predator reports. Some research has shown that the “cheep” warns of danger from ground predators and the “chuck” sounds the alarm to be aware of aerial predators. I think that a chipmunk sometimes calls just to proclaim its presence.

It is found as far as 300 miles out to sea and as high as 2 miles. It’s the pollen of ragweed. The wind-pollinated ragweed dispenses enough pollen that it is believed to cause 36 million Americans to suffer from hay fever. The crushed leaves of ragweed have a delightful smell. Ragweed is used by wildlife for food and cover. Many species of birds eat the seeds. Goldenrod is often blamed for causing allergies, but goldenrod is insect-pollinated. 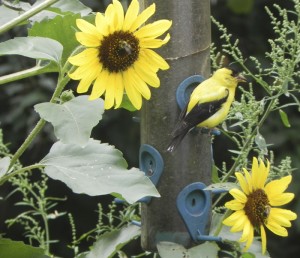 Sunflowers and a goldfinch by Al Batt.

At the airports, travelers are told repeatedly that the threat level is orange. I listened to the blue jays cry in alarm in my yard. I’m not sure what upset them. To the blue jays, it is always a red alert.

“There is an odd cardinal coming to my feeder. The bird has no feathers on his head. What’s wrong?” I am seeing a blue jay in a similar condition in my yard. The baldness is the result of an irregular molt and should cause no harm to the bird.

“Why does my oak tree have so few acorns?” Acorn masts cycle between heavy and lighter crops.

Several factors go into determining the mast. Heavy crops are typically preceded by light years. Drought or other stresses can affect production the following year. Spring weather can influence acorn production. Oaks are wind pollinated, so rainy weather during flowering can reduce pollination and seed set.

Most of the male ruby-throated hummingbirds are out of here in August. Nearly all the tiny birds we see after that are females or immatures.

The 20/20 rule for Minnesota winters states that any winter month in which 20 or more inches of snowfall is recorded, there will be at least one night with a minimum temperature falling to -20 degrees Farenheit or colder.

If you are afraid of spiders, you need not be afraid of daddy longlegs. They are not spiders. They are harvestmen, named such because they are most conspicuous in the fall, at harvest time. They are unable to build webs or spin silk.

On hot days filled with baling, I was told that I should listen to the cottonwood trees. A light breeze would cause the leaves to make such a liquid sound that it was supposed to quench my thirst. Water worked better. The pioneers could sense rivers at a distance. Cottonwoods are majestic kings that lord over our natural waterways. If rivers have a mind, they appreciate the treed shade.

As a boy, I would move with my father at a slow amble, through woodlands, prairies and wetlands. My father would tell me about the birds, plants, mammals and insects.

I am so grateful to my father for spending that time with me. A German named Von Herder wrote in the 17th Century, “The best powers of the human mind remain dormant until they are ignited into flame by a spark from another human being.”

The things found on a walk may seem mundane to some, but every creature has its inherent magnificence. Robert Michael Pyle wrote, “What is the extinction of a condor to a child who has never seen a wren.”

My father taught me that if you guide a child one day, that experience guides that person for the rest of his or her life. Because of my father’s guidance, I have had the great joy of leading countless nature walks.

I walked with my father. I walk with others. I’m closing the loop.

“The man who removes a mountain begins by carrying away small stones.” — William Faulkner

“Some people worry that artificial intelligence will make us feel inferior, but then, anybody in his right mind should have an inferiority complex every time he looks at a flower.” — Alan C. Kay