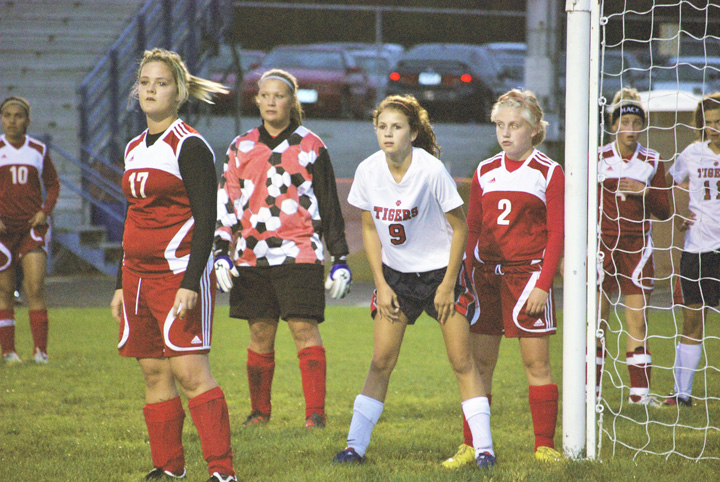 Ariel Christensen and Taylor Friehl each had hat tricks — Larissa Hacker was a goal away from joining them.

That is one of the many highlights of the Albert Lea girls’ soccer team’s 9-0 rout of Austin Thursday at Hammer Field.

“We take the rivalry seriously, and respect Austin,” Albert Lea head coach Rick Barnhill said. “We like to feel prepared to face them because we respect their ability to come out with emotion against us.”

The Tigers may respect Austin, but they didn’t let up against them Thursday. Four different players combined for four goals in the first half and five in the second, as Albert Lea cruised to their fourth win of the season.

“We were able to circulate the ball in a highly effective manner and we were excellent at getting a lot of people involved in the attack,” Barnhill said.

The Tigers outshot the Packers 50-6 and dominated the fight for possession of the ball.

Albert Lea held possession in their offensive half of the field for over 62 minutes of the 80 minute match, giving Austin little chance to score.

“That’s an amazing stat,” Barnhill said. “We’re probably one of the only teams I know of that chart that stat.”

Besides Christensen and Friehl, the Tigers got two goals from ninth-grader Hacker and a goal, headed in off of a corner kick, from Lindsey Stewart — her first varsity goal.

With the win over Austin, the Albert Lea girls’ soccer team has now won 42 consecutive regular season games against section opponents since 2004.

The Tigers play again in the Albert Lea Invite at 10 a.m. against Fairmont at Hammer Field.