Funeral services for Clifford (Jack) Kermes, 87, of Glenville will be held at 10:30 a.m. Saturday at Hayward Lutheran Church. The Rev. Katie Fick will officiate. Interment will be at the Bohemian National Cemetery in Myrtle. Visitation will be from 5 to 7 p.m. Friday at Bayview/Freeborn Funeral Home and one hour prior to the service at the church. To sign the guest book, go to www.bayviewfuneral.com. 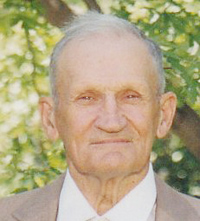 Clifford (Jack) Kermes was born on Nov. 27, 1922, in Freeborn County to John and Helen (Cafourek) Kermes. He grew up in the Oakland area and attended a country school. On March 2, 1946, he was united in marriage to Lucetta Otteson in Clarks Grove. The couple farmed in Oakland and in the Cass Lake area for three years then moved to the Glenville area where they farmed. In later years when Lucetta was diagnosed with Alzheimer’s, Clifford’s role changed to caregiver. Clifford was a member of the Trondhjem Lutheran Church and Hayward Senior Citizens. Pasttimes he enjoyed were fishing, trapping, hunting and dancing at the Brick Hall where he was a long time member of Lodge Zare Zapadu No. 44. Clifford was very proud of his Czech heritage and loved to visit with people about it. He also liked riding his golf cart around his farm where also hunted deer and turkey. As a couple, Jack and Lucetta enjoyed traveling to Europe and across the U.S.