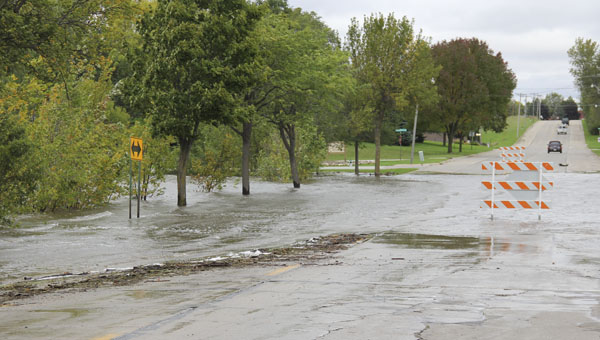 While more rain fell on Saturday morning, Freeborn County Administrator John Kluever said the small accumulations at this point would not be impactful, but perhaps more of a nuisance.

The county’s emergency hot line will be up all weekend. Kluever said anyone with questions about flooding or flood damages should call 507-377-5229, and someone will be on the other end to answer. 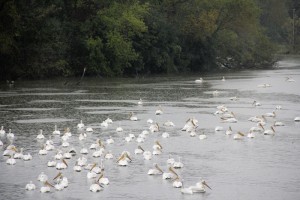 “There are serious currents going through the water. Fooling around in the creeks is not a good idea,” Roche said.

He also wanted to remind people that walking in ditches could also be hazardous to health, as, “you never know what’s been in the ditches.”

“We’re right below that level on Fountain Lake. That’s about as high as it gets.”

Roche reported that Turtle Creek in Mower County reportedly crested at 1 p.m. Friday at about 12.7 feet, but no reports were available on the Freeborn County side.

Jahnke also reported that pumping to alleviate an overloaded sewer system because of heavy rains stopped as of 6 a.m. Friday, and levels were back in the normal 15- to 20- million gallon range.

Matt Levorson of the Freeborn County Sheriff’s Office issued a no wake alert for Fountain Lake on Friday because of high water levels. 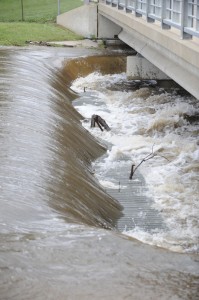 Water rushes over the dam on Fountain Lake beneath Bridge Avenue in Albert Lea on Friday. -- Tim Engstrom/Albert Lea Tribune

Freeborn County Sheriff Mark Harig expects that alert to be lifted by Monday or Tuesday. “Little traffic is expected, but people are pulling their boats off the lake for fall,” he said.

Katherine Island was 90 percent submerged as of Friday afternoon. The mermaid at New Denmark Park was submerged up to her torso, and Fountain Lake was out of its banks, with one spot of the lake even reaching the sidewalks in the park.

Street closures in Albert Lea on Saturday included Main Street, Lakeview Boulevard by Willomere Road and Lincoln Avenue. Water was reported standing at Katherine Street and at the intersection of Abbott Street and Pleasant Avenue.

Two county roads were reported closed as of Saturday morning: County Road 35 and County Road 30. County Road 30 north of Maple Island was closed due to a large sinkhole that developed. For the latest in road closures, click here.

Dan Kenison of the Freeborn County Engineer’s Office reported that blading was completed on gravel roads on the county’s south side. Roads on the north side were still being graveled and bladed, which Kenison expected to be completed by Monday night.

“If you see standing water, turn around,” said Roche. “On gravel roads, it’s important to pay close attention as there are washouts and soft shoulders. After dark travel is especially dangerous on gravel.”

The Freeborn County chapter of the American Red Cross was busy Friday afternoon doing storm damage assessments throughout the county. Jeanie Opdahl, director of the Freeborn County Red Cross, said very few people had called about being displaced from their apartments or homes, but a lot of basement flooding had been reported.

Opdahl said it’s important to clean and sanitize basements that have received flood water, and the Red Cross has cleanup kits available which give “how-to” directions for the cleanup. Call the Red Cross at 373-4544 to request a kit.

Kluever said anyone with flooded basements in the city should also call the city inspector’s office.

Kluever also wanted to remind residents that if septic systems are covered, it’s recommended to pump those before using them again.

Well and water testing are also available with the Environmental Services Office, although Kluever said as of Friday morning, no wells under water had been reported.

In the city of Wells, heavy rains on Thursday caused the storm water system to back up. City Administrator Jeremy Germann estimated that the town received about 10 inches of rain.

School was dismissed early to alleviate water usage, and a number of residents were dealing with rainwater and sewage backups in their basements, along with water over the roads.

He said the municipal system pumped 7 million gallons before levels started to cease Friday morning. “That’s a very large volume to go through our system,” he said.

As of Friday afternoon, Germann said the system is no longer backed up and water levels around town had gone down significantly.

“The break in the weather really helped get water out of our system,” he said. “The golf course levels have gone down substantially; it’s just a few puddles here and there.”

Wayne Sorenson of the county’s Environmental Services reported on Friday that one house near Hartland, on the west side of Highway 13, was completely surrounded by water. He said a drive around the Alden, Hartland, Hollandale and Freeborn areas seemed to be drying up.

The city of Freeborn received an estimated 10 inches of rain during Thursday’s storm.

“We had six inches Thursday morning and then it rained all day long,” said Steve Seipp, fire chief and emergency manager for Freeborn.

Residents of Freeborn, like surrounding communities, were dealing with street and basement flooding. On Friday, he said there were no Freeborn city streets closed.

“We had some flooding in low-lying areas, at the old football field,” he said. “With as much rain as we got here, we’re pretty lucky compared to everyone all around.”

The Salvation Army had units operating in Mower and Steele counties on Friday, offering bottled water for first responders and volunteers helping various sandbagging operations in those areas. They were in New Richland Thursday night.