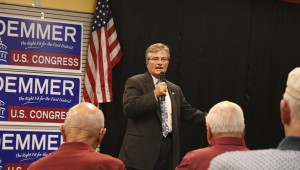 With a focus on health care, job creation and the state and national budget, people on both sides of the aisle took the opportunity Friday to make their opinions known during a town hall meeting with state Rep. Randy Demmer, the Republican candidate for the 1st Congressional District.

The meeting, at Northbridge Mall in Albert Lea with about 100 people, was one of two scheduled for Demmer in the area Friday; the second was at Bob Hanson Park in Clarks Grove.

While at times the discussion got heated — and not everyone in the audience agreed with Demmer’s viewpoints — Demmer stressed that he was not afraid of differing opinions.

“I deserve the right to disagree …” he said a few times throughout the meeting. “It’s OK for us to have differences.”

He said if he’s not willing to stand up at town hall meetings and take hard questions, he doesn’t deserve to be in Washington, D.C., or even in St. Paul, for that matter.

He said Americans all over the country should be having similar types of discussions, whether on the federal, state, county, city or even township level.

Demmer, of Hayfield, is currently completing his fourth and final term in the State House of Representatives, serving District 29A. During his last term, he also served as assistant minority leader.

Through the years, he said, he worked as a farmer, has served on the Hayfield School Board, has been active in the community and has had several businesses. 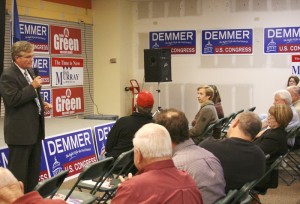 He is running against incubment Congressman Tim Walz of Mankato.

Demmer said he thinks the upcoming general election is the most important election of his lifetime.

“We are making a fundamental decision which way we want our country to go,” Demmer said.

He said he does not support the health care bill and noted he thinks it is “fundamentally wrong” when the government mandates health care.

He also pointed out that there has been a massive run-up in debt nationally, with no plan to pay it back.

One person from the audience questioned whether Demmer was just trying to scare people about the state of the country and accused him of not having any new ideas to fix the problems.

Demmer said he was “just telling the facts,” and noted that Congress has been under Democratic control during the last four years.

Another person questioned whether the representative would support loan forgiveness for people who have chosen to work in public service.

He said he did not.

Regarding the $14 trillion national debt, Demmer said ultimately it will have to be repaid. He said the country needs to find ways to increase balance of trade and support the farmers in the country — and especially within the 1st District — during the process.

He said he does not support the spending that has happened during the last few years for bailouts and stimulus projects. He called it just a “redistribution” of taxpayer dollars.

“We’ve increased unemployment since we started doing this,” he said.

He said he would not vote to privatize Social Security as it is something that people have paid into. He did, however, note that he thought there were problems with the Social Security system.

Regarding renewable energy and specifically the ethanol industry, Demmer said he supports an energy policy that takes the country toward energy independence. He is a proponent of nuclear energy and ethanol, noting that ethanol is good for clean air and private sector job creation.

He said during the rest of the campaign season, he will go to anybody’s forums that are fair and balanced when he is asked. He pointed out that Walz has turned down a series of forums.

“His refusal to come to these shows why he should not be elected,” Demmer said.

Prior to the meeting, Demmer spent a large part of the day visiting area businesses. He said he has a major focus on job creation.