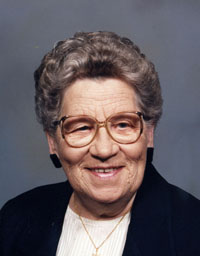 Edna was born Sept. 7, 1915, in Steele County, the daughter of John and Matilda (Holmes) Schear. She graduated from Ellendale High School.

Edna was married to Bennett J. Berg who preceded her in death. She had been employed in the Ellendale Public Schools as a cook, and was a lifelong member of the First Lutheran Church. She was active in the Ladies Aid.

Edna is survived by her sons: Allan and his wife Louise of Albert Lea, Phillip and his wife Bonnie of New Mexico and Rick Berg of Eagan; grandchildren include: Debra (Rick) Reimann of Brooklyn Center, David (Deann) Berg of Burnsville, DeAnne (Dale) Maroo of Mason City, Iowa, Sherri Lynn Berg of California; and two step grandsons. There are eight great-grandchildren, six step great-grandchildren and five great-great-grandsons.

Edna was preceded in death by her parents, husband, two sisters, two brothers and one great-grandson.