Eggs are OK in Albert Lea 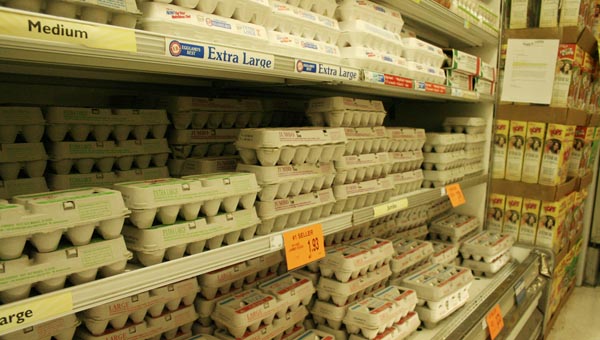 A sign hangs from cereal boxes next to the Sparboe Farms eggs at Hy-Vee this morning. The sign tells customers that the Sparboe Eggs at Hy-Vee are not part of the recall of eggs connected to two farms in Iowa. -- Tim Engstrom/Albert Lea Tribune

While most grocery stores and restaurants in Albert Lea did not have eggs tied to last month’s recall, residents in the area are still feeling the effects of it — whether it’s through general concern, deciding to make more cognizant food choices at restaurants or in spending more for untainted eggs.

The Albert Lea Walmart was the only store in Albert Lea that has had to remove eggs from their shelves after news that more than half a billion eggs had been recalled at two Iowa farms because of a link to salmonella poisoning.

According to a corporate news release, the brands removed at Walmart stores included Sparboe Farms, Dean Foods, Hillandale Farms and Cal-Maine Foods. These brands were sourced from or linked to Wright County Eggs, one of the two farms involved.

Officials at Nelson’s Market Place, Hy-Vee and Kwik Trip locally have confirmed their eggs were not affected by the recall. The companies, however, have still had many questions by customers about egg safety.

Casey Connor, manager of Nelson’s Market Place in Albert Lea, said his store’s Grandma Alice eggs come from a Minnesota supplier and should not be of concern to customers.

Al Weisert, manager of the Albert Lea Hy-Vee, said his store did not receive any eggs from the two Iowa farms in question. His company gets its eggs through Perishable Distributors of Iowa.

“Nobody has anything to worry about,” Weisert said.

The same is true for Kwik Trip, which gets their eggs from Reedsburg Eggs in Reedsburg, Wis., said John McHugh, manager of corporate communications with Kwik Trip.

“It’s a safe source we’ve had no issues with whatsoever,” McHugh said.

He noted that Kwik Trip has its own food safety program in place, where all food from outside food suppliers is inspected. If there’s an outside supplier in question, that company is required to provide an independent audit and then Kwik Trip officials inspect the farm as well.

He said the company places a large emphasis on food safety.

McHugh said the recall has not affected Kwik Trip stores; sales have not gone up or down.

At Nelson’s, the price of eggs has gone up about 40 percent.

Diane Newman, owner of Diana’s Diner on Broadway Avenue in Albert Lea, said she purchases her eggs from Kwik Trip.

The recall has affected some of her customers more than others.

The biggest changes she’s seen are in how a customer orders their eggs. Instead of choosing over easy or over medium, customers are choosing scrambled or hard eggs.

Connie Bolton, manager of Wintergreen Natural Foods, said the egg recall has driven more people to their store who are interested in buying eggs from a local source.

Wintergreen’s eggs come from a farmer in Owatonna. They are organic and free-range.

“It seems like more people are looking for something that’s more safe — not as risky,” she said. “We’ve always sold a lot of eggs, but it seems like lately people have been more concerned about what they’re buying.”

Federal officials say the most recent egg recall is one of the largest egg recalls in recent history. Americans consume about 220 million eggs a day, based on industry estimates. Iowa is the leading egg producing state.

While this summer’s egg recall has highlighted the issue, salmonella is always occasionally present in the roughly 80 billion eggs sold in their shell in the U.S. each year. The harmful bacteria typically contaminate one out of every 10,000 to 20,000 eggs.