The family of Eric Elleby, a 2006 graduate of Albert Lea High School, is proud to announce, that he is attending the University of Illinois, Chicago, Rural Medical Program. 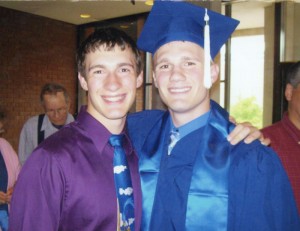 Elleby left Minnesota for the University of Illinois, Champaign, the fall of 2007 and as a freshman, he walked on to the Illini wrestling team, where he competed with the team through part of his sophomore season until injury struck. At that time, he decided to leave wrestling and dedicate his energies to achieving his goal of getting his degree in chemistry, and pursuing a career in the medical field.

This concentrated effort in academics resulted in Elleby earning multiple 4.0 GPA’s while taking 17 to 22 hours of advanced course work.

He graduated with a Bachelors of Science in liberal arts and sciences with a chemistry degree in May of 2010, and at commencement he received the Reynard Charles Fuson Award for academic excellence in chemistry. This was one of five total awards handed out at commencement to chemistry majors at the University of Illinois.

Elleby will be attending the University of Illinois at Chicago College of Medicine this next year in Urbana-Champaign and then will be spending his M2-M4 years at Rockford. He is a member of the Rural Medical Program.

Elleby appreciates all the love and support he has received from his family and grandparents, Jim and Nancy Skaar. He feels that the Albert Lea program established the foundation for much of his success, with particular appreciation for life lessons picked up from working with Neal Skaar on his family farm. Also, he attributes his interest in the medical field to time spent at Albert Lea Medical Center and thanks many of the doctors there for the great care they gave him.