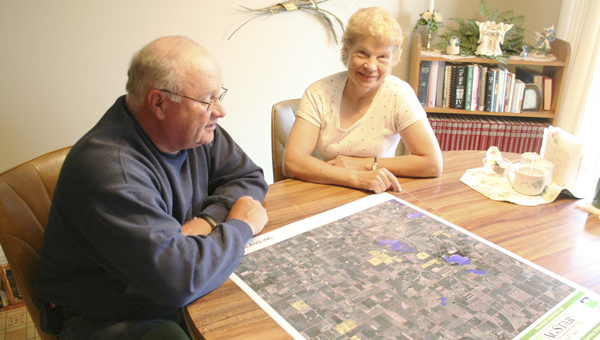 Bruce and Beth Andersland of rural Emmons point out locations of 14 earthen basins they’ve installed on their property over the past 23 years. -- Michelle Haacke/Albert Lea Tribune

EMMONS — Bruce and Beth Andersland installed seven earthen basins across a hilly 200-acre plot of farmground this past May, in an effort to save the topsoil.

It was also a move that recently earned them the annual Outstanding Conservations Farmers Award from the Freeborn County Soil and Water Conservation District for 2010. 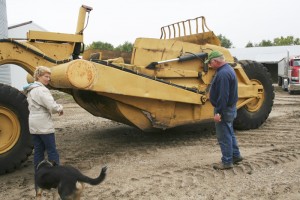 Of course, the Anderslands didn’t have any awards in mind when planning the project. “The topsoil was washing away during heavy rains and making gullies that you can’t get the combine across,” Bruce said.

The Anderslands grow mostly corn and soybeans on several plots, spanning 1,600 acres, northwest of Emmons. Bruce began operations on the “home farm” in 1974.

As their farming operation has grown over the years, so has their awareness of conservation practices. They installed their first earthen basin back in 1987. “It was on Frog Sully,” Bruce said. “There was a big gully cutting the field in half.” 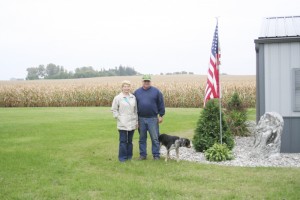 Basins are small earthen embankments installed perpendicular to a concentrated flow direction, with a tile outlet above it. Surface water that has been temporarily stored is safely removed underground by tile to an outlet, instead of running it over the surface and causing erosion.

Bruce said the basins — which he more simply calls dikes — control erosion, reduce surface water runoff and improve the productivity of the soil on hilly land. “You don’t need them on the flatland, just the hills where you need to stop the soil from washing away,” he said.

After installing their first basin, Bruce said it worked so well that they continued this practice throughout the years. They already had seven basins on four different farms when they decided to plan their most recent project. 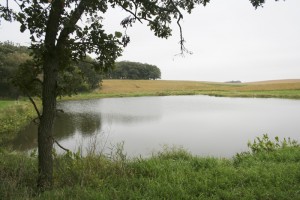 Bruce and Beth Andersland installed this pond, about an acre in size and five feet deep, to improve wetland for waterfowl on their farm in rural Emmons. -- Michelle Haacke/Albert Lea Tribune

Because they had installed other basins before, Bruce said they had the know-how and equipment to install these dikes on “Doc’s Farm” themselves. However, because this was considered to be such a-large project, and a portion was being funded by a USDA Environmental Quality Incentives Program contract, they worked closely with local conservation officers and an engineer out of Rochester in finalizing plans.

“The planning was the longest part about this,” Bruce said. Total planning for the project took a couple of years.

Once the plans were approved, Bruce was able to get the tiling done in May. The following week, with a couple of Cats, a dirt scraper and backhoe, along with the help of their hired man, Brian Schmidt, Bruce and Beth installed the basins. “They tiled for a week and we built dikes for a week,” Bruce said. 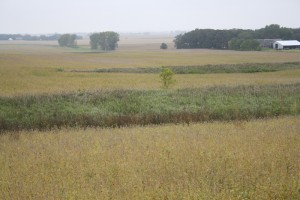 The tops of three earthen basins that the Andersland's installed on their hilly farmland can be seen above. -- Michelle Haacke/Albert Lea Tribune

The basins were built at a variety of different sizes, Bruce said, “based on the amount of water in the gully.”

The largest basin installed was 13 feet tall and about 200 feet long, with a 40-foot base and eight-foot top to drive across.

Bruce estimated he saved about one-third of the cost by using his own equipment and labor.

While grass waterways can be installed as a solution to concentrated flow erosion, Bruce said he prefers earthen basins. “You do this once and you’re done. You don’t have to maintain them like a grass waterway,” he said.

“They were chosen because of conservation practices they’ve installed and other cultural things they have done to promote conservation,” said Don Flatness, soil and water district manager.

In other conservation practices, Bruce no-tills his soybean acres into standing corn stalks from the previous year. He said this allows him to do some tillage on the bean stubble before corn planting and still maintain a low overall erosion loss for the two-year crop rotation cycle.

To improve wildlife habitat, he installed a man-made pond that spans an acre of land and runs five feet deep.

In addition to their cash/grain operation, the Anderslands also have a purebred Simmental beef cow herd. They sell some of the calves they raise for breeding purposes and feed out the balance. Beth said they try to sell most of the feeders locally to individuals for home use.

Beth also serves as treasurer of the Minnesota Simmental Association and Bruce serves on the Northern Country Co-op Elevator Board.

The Anderslands will be honored at a special noon luncheon at the 2010 Annual Convention of the Minnesota Association of Soil and Water Conservation Districts in early December. The editor of The Farmer magazine usually presents the awards.

This award, Flatness said, is given annually by the SWCD to recognize a local farming operation that has done an extraordinary job of conserving and protecting their soil and water resources.