Ethel Lavonne Hoffman, 81, of Blooming Prairie, died at her home Tuesday, Sept. 14, 2010. She was born Aug. 18, 1929, to Vern and Ester Mae (Booen) Barber in Shell Rock Township, Freeborn County. She married Leonard Giles and later divorced. On Sept. 12, 1953, she married Leslie J. Hoffman in Austin. A member and active volunteer of Red Oak Grove Lutheran Church, Hannah Circle, Blooming Prairie Servicemen’s Club and American Legion Auxiliary (past president) she spent most of her life in the Austin/Blooming Prairie area. 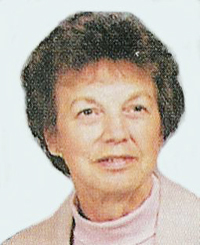 She was preceded in death by her parents; her husband, Leslie; brothers: Jim and Lloyd; sisters: Phyllis and Carol and an infant son.

Funeral services will be held at 11 a.m. Saturday at Red Oak Grove Lutheran Church with the Rev. Gene Leiter officiating. Visitation is from 4 to 7 p.m. Friday at Worlein Funeral Home in Austin and at the church one hour prior to the service. You may send condolences to www.worlein.com. Memorials are preferred to Red Oak Grove Church Debt Reduction Fund.