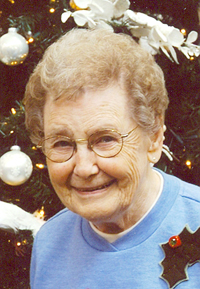 Evelyn was born Oct. 2, 1919, the daughter of Gifford and Nora (Kurth) Ficken, in State Center, Iowa. She moved with her parents to Hollandale in 1926. In 1930, they moved to a farm south of Rosetown, Saskatchewan, Canada. Evelyn graduated from high school and business school in Rosetown. In 1943 she came to Iowa and Minnesota to visit relatives and while in Albert Lea, she was offered a job at Universal Milking Machine. It was there she met Robert Kuehl. They were married at First Presbyterian Church in Albert Lea on Jan. 15, 1947. He died Dec. 17, 2006. She enjoyed music, travel and handwork.

Survivors include nieces, nephews and a sister-in-law, Alice Kuehl of Bremerton, Wash.

She was preceded in death by her two infant sons.

Memorial services will be held at the First Presbyterian Church in Albert Lea at 1 p.m. Sunday. Private family burial will be at Hillcrest Cemetery.