Memorial services for Florence H. Mumm of Albert Lea, will be held at 4 p.m. on Saturday at Trinity Lutheran Church in Albert Lea. The Rev. Curtis Zieske will officiate. Interment will be in Geneva Cemetery. There will be a time for sharing memories and refreshments after the service. 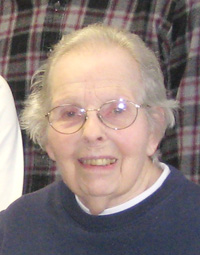 She was born on Oct. 30, 1918, in Hutchinson, the daughter of Martin and Susan (Hansen) Tange. Florence was united in marriage to the Rev. Roy F. Mumm on Aug. 25, 1951. They had made their home in the Geneva and Albert Lea area since 1956. Florence was a warm caretaker of the people in the churches that Roy served. She shared her talents and played organ and directed choir for several years. She was a member of Trinity Lutheran Church and had been active in church circle and also in the church women’s activities.

Petersen of Omaha, Neb.; grandchildren: Shawna (Derek) Petersen-Brown of Minneapolis, Kirsten, Erica and Alyssa Mumm all of Roseville; and several nieces and nephews.

Florence was preceded in death by her parents; her husband, Roy Mumm; sister, Helen Neve; and brother, Reynold Tange.