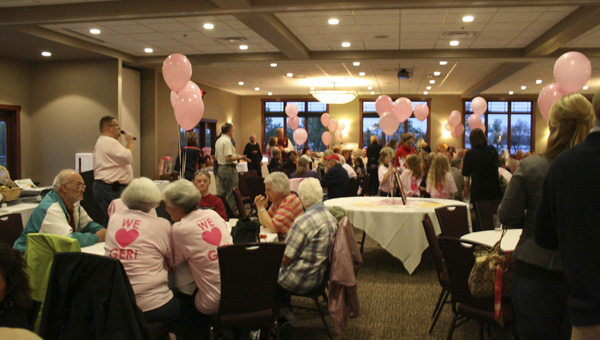 Tribune Publisher Scott Schmeltzer speaks to a busy room Thursday night at Wedgewood Cove Golf Club. About 300 people attended the benefit to offset Geri Murtaugh’s medical bills. Murtaugh was the assistant editor of the Albert Lea Tribune prior to her death on Aug. 7 at St. Marys Hospital in Rochester. -- Kelli Lageson/Albert Lea Tribune

Sister says: ‘I thought it was really nice the paper would do that’

Family, friends and community members gathered Thursday night to remember a special woman and raise funds to help her family.

A large crowd of about 300 people came to Wedgewood Cove Golf Club in Albert Lea Thursday night for a cancer benefit. The benefit was hosted by family and friends of Geri (McShane) Murtaugh, to help offset medical expenses from her time in the hospital. She passed away Aug. 7, after a courageous battle with cancer.

While she was hospitalized friends and family started organizing a fundraiser in hopes she would be better and able to attend. After she passed it was decided to continue on with the fundraiser to help her family.

“I thought it was really nice the paper would do that,” Geri’s sister Colleen McShane said Thursday. “This is amazing.”

Much of Geri’s family were present, including her husband, Mike, and daughters Erin and Tierney. Erin said she liked seeing how many people came to the benefit. She had also invited many friends and thought the decorations were beautiful.

Meissner also said the decorations were beautiful and that her family appreciated the event. Tables had pink napkins and centerpieces of wine bottles with pink balloons attached.

Many friends of Geri’s were at the event included the Rev. Jim Berning from St. Theodore Catholic Church. Berning said it was wonderful that people were coming together to support the family.

“It’s a great event for the community,” Berning said. “We’re certainly missing her.”

Mike also spoke at the event to thank all the people who attended. He said their family wasn’t unique having been affected by cancer.

“We sure have a lot of good friends,” Mike said. “The Tribune is truly a family.”

The event started around 5 p.m. with a silent auction running until 7:15 p.m. More than 200 items were donated to the event. Larger items went in a live auction starting around 8 p.m. The event ended around 9 p.m. Items auctioned included major sports team tickets and memorabilia, woodwork, framed artwork, quilts, baskets of goodies and many gift certificates. A large selection of items were auctioned with everything from dolls to jewelry sold.

The event cost $10 to attend, with all proceeds going to the Geri Murtaugh Cancer Fund at Farmers State Bank in Albert Lea. Having successfully fought off breast cancer two years ago, Geri had recently been diagnosed with cancer in her spine, pelvis, liver and brain. She died Aug. 7, on her 24th anniversary of working at the Tribune.

Entertainment was provided by Rachel Cristensen who played harp during the event. “We heart Geri” T-shirts were also available for sale.