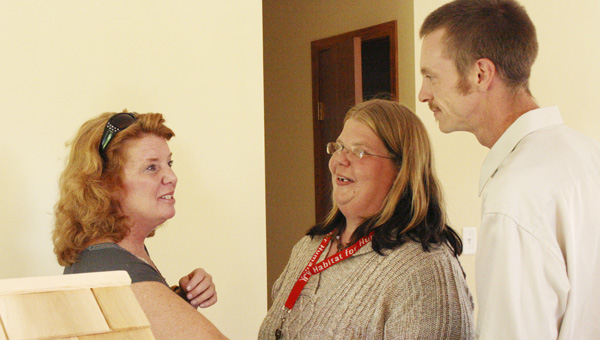 One area family was thankful beyond words Sunday as the house they and the community have been building this summer has finally become a home.

On Sunday afternoon, Glenda Erickson, with daughters Summer Beightol, 10, and Sage Iverson, 3, became the proud recipients of the newest Freeborn-Mower Habitat for Humanity home on the corner of Spark Avenue and Alcove Street in Albert Lea.

“You guys are the greatest people in the world,” Erickson told a room full of Habitat for Humanity volunteers and other friends at the home’s dedication. “Thank you so much.”

During the dedication, Freeborn-Mower Habitat for Humanity Board President Barry Irish officially turned over the keys to the new home to Erickson. The finishing touches to the home — the installation of carpet and landscaping — will be completed in the next few weeks. 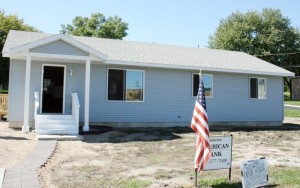 Erickson will be able to move in Oct. 1.

The Rev. John Holt of First Lutheran Church blessed the house and the family, praying for peace and safety.

Several other special gifts were also given, including a family Bible from Habitat for Humanity International, a quilt from Central Freeborn Lutheran Church women, and two quilts and pillows from First Baptist Church.

Erickson, her boyfriend, Travis Lawson, and her daughters have lived in a trailer in Twin Lakes since July 2009. They used to live in Albert Lea, but it became too expensive.

To qualify for a Habitat for Humanity home, a family has to be in need of a home, have a job and work a set number of hours on the home or in the community. They must make payments after the house is built.

Specifically, Erickson had to complete 250 volunteer hours, also known as sweat equity. Of those hours, she had to do 150 on her own, and family or friends could donate the other 100.

Organizers said there were more than 40 volunteers who contributed to this project since building started the first week in June. It is the 11th Habitat home in Freeborn County.

Irish thanked the volunteers for their efforts.

After the dedication, Erickson said she still could not believe she had been selected to be the recipient for the house.

Even though the carpet had not yet been installed and there were a few other finishing touches to be completed, she added that she wanted to sleep in the new house that night, even if it had to be on the floor in some sleeping bags.

She said this will be the first time for her daughters to have their own rooms.

Beightol, who just began fifth grade, said one of her favorite things about the new house was that it was new and nobody had lived in it before. She planned to decorate her room with an underwater theme because she likes mermaids.

The house is one level with three bedrooms and one bath.

Organizers said Habitat for Humanity will be taking applications for its next house in Freeborn County this fall. The organization tries to complete one house each year in the county.