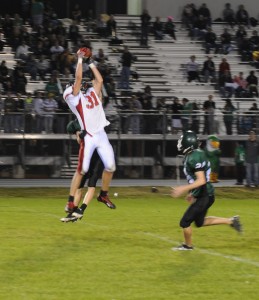 FARIBAULT — Faribault’s Anthony Gustafson scored on a 58-yard touchdown run with 2 minutes and 22 seconds left in the first half and Albert Lea’s final drive ended with three seconds to play on a Kyle Kriewall incomplete pass, as the Falcons took a 21-14 lead into halftime. 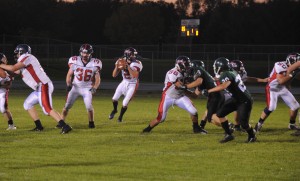 The Tigers scored first when Kriewall ran the ball down the Falcons’ sideline 79 yards to the Faribault three-yard line. Dillon Stolt scored on the next play, putting the Tigers up 7-0, early.

The Falcons responded on the very next drive as they rushed for 37 yards on the first play. After two first downs, quarterback Jake Salba connected with Jack Helgeson for a 21-yard touchdown pass, evening the score 7-7.

After the two teams exchanged punts, Albert Lea put a 12-play series together, as Kriewall passed to Aaron Klatt for 10 and 23 yards, Cameron Solie for 25 yards and finally Dalton Westerlund for five yards a touchdown — tying the game at 14-14 — before Gustafson put the Falcons up 21-14