On Sun. Aug. 29, 2010, Harlan Odell Opdahl, 72, left his worldly shelter to travel to his permanent heavenly home. Harlan passed away peacefully at his home in Pierce, Idaho, following a heart-related illness. 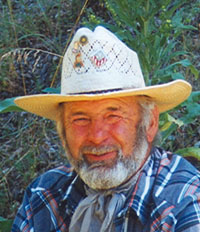 Harlan was born in Albert Lea, on June 17, 1938, to Gertrude and Henry Opdahl. He grew up as a farm kid and graduated from Alden High School in 1956. He attended Waldorf College, earning his associate’s degree in 1958. He married his high school sweetheart, Barbara I. Ramsdell, on Jan. 17, 1959. He owned a corn shelling and trucking business for a short while, then in 1965 a vacation trip to the Pacific Northwest resulted in a move west with his family.

Harlan worked in Pierce at Jaype for Potlatch Corp. and for several area loggers until 1979, when he discovered a way to unite his love of the outdoors and hunting with a livelihood. Harlan, his brother Duane and their wives purchased an outfitting business which they changed the name to Triple “O” outfitters, and life became much busier for all of them.  Meriwether Lewis and William Clark were kind enough to get lost 200 years ago in the area Triple “O” Outfitters utilized, and Harlan enthusiastically delved into the history of that historic trek and began leading trail rides and visits to some of the camps Lewis and Clark chronicled. He shared his love and knowledge of the Lolo portion of the trail with people from around the world, including joining friend and film maker Ken Burns at the White House in November 1997 to show then President Bill Clinton a preview of Ken Burns documentary of Lewis and Clark. They also had “Good Morning America” join them on the Lolo Trail at Weitas Meadows on July 14, 2002, as well as numerous articles in publications including National Geographic and Western Horseman.

Harlan was a member of Faith Lutheran Church, an honorary lifetime member of the Idaho Outfitter’s and Guides Association, Clearwater Search and Rescue, the North Central Idaho Resource Advisory Committee, and served on various committees promoting  multiple land use in Idaho. He was a proud endowment member of the National Rifle Association.

Harlan was an avid outdoorsman. He loved to camp, hunt, ride horses, snowmobile and watch Westerns. The spirit of hospitality and generosity was always evident in the Opdahl home. Meals were rarely limited to “just family.” Harlan loved the time he spent with friends and family. His Christian faith provided them with a role model, guiding hands and genuine concern for those around him.

Harlan was preceded in death by his parents, Henry and Gertrude Opdahl; a daughter, Katherine; and his brother, B. Duane Opdahl.