Funeral services for Harvey Neil Pankratz,  66, of Albert Lea, will be held at 10:30 a.m. Friday at Crossroads Evangelical Free Church. The Rev. Kim Swenson will officiate. Following lunch, the Interment will take place at 2:30 p.m. Friday at the Evangelical Mennonite Brethren Cemetery in Mt. Lake. Visitation will be from 6 to 8 p.m. Thursday at Bayview/Freeborn Funeral Home and one hour prior to the service at the church. To sign the guest book, go to www.bayviewfuneral.com. 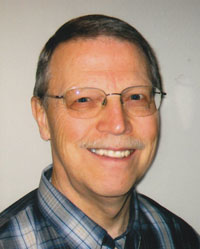 Harvey died Wednesday, Sept. 1, 2010, at Mercy Medical Center in Mason City, Iowa.
Harvey Neil Pankratz was born on June 7, 1944, in Langdon, N.D., to John and Sarah (Janzen) Pankratz. Harvey grew up on several farms near Munich, N.D. He graduated from Munich High School and from Grace University (Bachelor of Science in missions) — Omaha, Neb. He married Lois Derksen on June 10, 1966.
Harvey served as a missionary in Sweden with Greater Europe Mission from 1968-88. He earned an MDiv from the University of Uppsala, Sweden, and then taught at the Nordic Bible Institute in Säffle, Sweden for many years. Upon his return to the USA, he farmed for seven years near Roseau. In 1994 he moved to Colorado Springs, Colo., to work at the International Headquarters of Greater Europe Mission. In 2001 he moved to Minnesota and continued his job through telecommuting. He retired on June 30, 2010.
Harvey became a Christian at the age of 10 and spent his life serving the Lord he loved. He enjoyed working with his hands and teaching by example.
He is survived by his wife, Lois; sons: Stephan (Tanja) Pankratz of Sophia, Bulgaria, Thomas (Angela) Pankratz of Rochester and David (Kari) Pankratz of Eden Prairie; grandchildren: Lydia, Eva, Jacob, Benjamin, Anna, Julia, Samuel, Jaden, Daniel, and Olivia; one brother, Gary (Jane) Pankratz, of Grand Forks, N.D.; and numerous nieces, nephews and in-laws.
Harvey was preceded in death by his parents, John and Sarah Pankratz, and a daughter, Kari Lynn Pankratz.