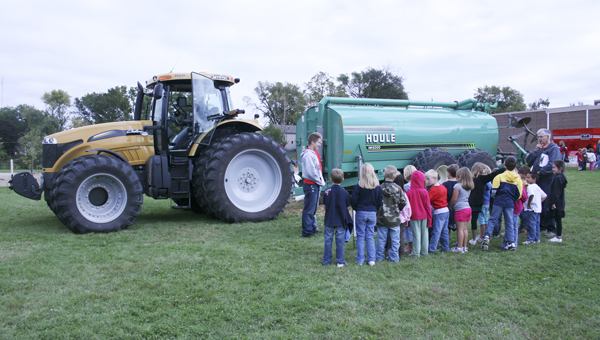 WELLS — A farm accident can occur as quickly as the blink of an eye. 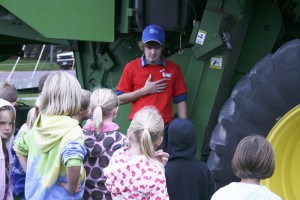 “Tractors are cute and fun for kids, but they’re extremely dangerous,” said Dylla. “They’re not like the toy tractors kids play with.” 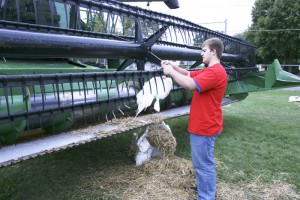 A variety of modern farm equipment — tractors, wagons, an auger and a combine — were scattered across the terrain. Students from the high school’s Ag Leadership class were assigned to each station to talk with the younger students, put on demonstrations and answer questions. 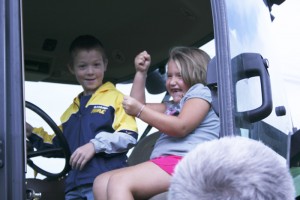 First graders Erica Johanson and Blake Schroeder get a feel for the driver’s seat at the tractor run-over demonstration. -- Michelle Haacke/Albert Lea Tribune

“We remind the kids not to have loose clothing, and to make sure their hair is tied back,” said Ovrebo.

A few feet away, FFA member Kelsey Nowak was teaching the youngsters about ATV/snowmobile safety. She reminded children to always wear their helmets. 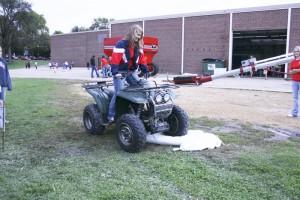 “We tell the younger kids to always ride with their parents and never ride with two passengers,” she added.

Before each new demonstration, FFA students would strategically attach new dummies to various areas on the equipment — near a tire, to the corn head of the combine, to the front of the ATV. 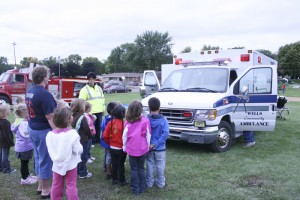 The older students then drove forward and the dummy would be destroyed on impact, smashed by a tire or shredded by the combine head.

“We try to make that impression, that you really need to stay away,” said Dylla.

Piles of straw were scattered near each of the pieces of farm equipment after the demonstration, which showed the dangers of farm accidents.

Dylla said the farm safety program is important for all children, not just those who live on farms, because the fall season is when many children visit farms and there’s more chance for accidents.

Wells fire and ambulance crew members were on hand with their equipment, as well.

“It’s fun,” said Dawn Cory of the Wells ambulance squad. “It’s nice to educate the kids and hear how they perceive what we do for them. We hope to be able to calm their fears.”

Banco Electric demonstrated the effects of downed trees after a storm, near power lines.

Dylla’s No. 1 piece of advice to parents of children growing up on or visiting a farm?

“Make sure you know where the kids are at all times,” he said. “That equipment is just too big to see the kids, and there are a lot of moving parts. Things can just happen so fast.”

According to Dylla, about 500 students at United South Central elementary and middle schools attended the event.

He said the program is in its 18th year and has received State and National FFA recognition for excellence and was awarded a National Youth Safety Award.