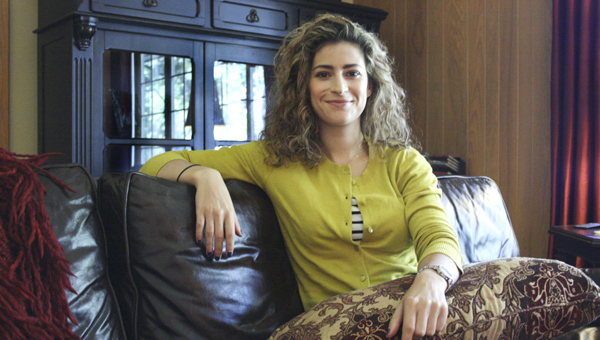 For as long as she can remember, Albert Lean Jessica Root has loved to travel. 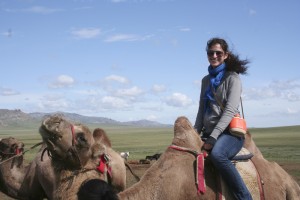 Jessica Root has numerous photos of her time abroad. Here she is on a camel in the countryside in Mongolia. -- Submitted photo

She’s been to Hungary, South Korea and Hong Kong to teach English as a second language and has also visited Cambodia, Vietnam, Russia, the Philippines and France, among others.

Today, Root, the daughter of Albert Lea High School Principal Al Root and his wife, Griselda, will leave for the University of Durham in England to further her education with an international Master of Business Administration. 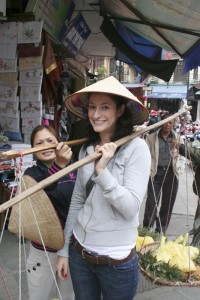 As part of that degree, she will be required to learn a language — she’d like to learn Mandarin Chinese.

“I’ve liked being around people who traveled,” Root said. “They could teach me things from places I’ve never gone.”

A 1999 Albert Lea High School graduate, Root graduated from the University of Minnesota in 2004 after studying international relations political theory.

After graduating, she worked for a professor and an international criminal court.

In the fall of 2005, she and boyfriend, Jeremy Dennison, became certified to teach English as a second language in Budapest, Hungary.

Working for schools, companies and doctors, she said their aim was to help people with English, especially for business.

Root said one of the things that stuck out to her about that country were the beautiful steam baths.

Besides this, she and Dennison noted that the country is still trying to catch up to other countries economically and that it has pockets of gorgeous areas, right next to areas of vacant lots with broken windows. 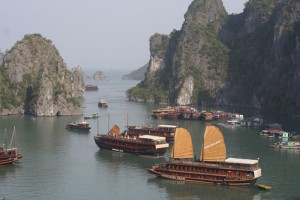 Working in the middle of a more rural area known as the Pocheon District, Root said Korea was a complete different country.

There, she said, people would stop and point at them all the time because they were Westerners.

She noted the people were very conscious of their features there, and the people had more of a social hierarchy. 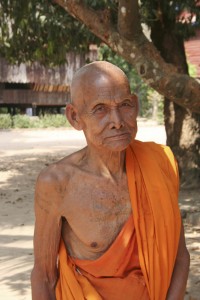 There, she got to try a variety of foods she would never have tried in the United States, including silkworm larvae and octopus legs, among others.

In the fall 2007, Root and Dennison went to Hong Kong, where they worked for an international school and lived in a busy shopping district.

“Hong Kong is the London of Asia,” Dennison said.

There are different areas for different cultures throughout and each respects the other.

“You can be whoever you want and fit in there,” he said.

While there, they also got to take part in activities such as hiking and visiting islands and hidden beaches. 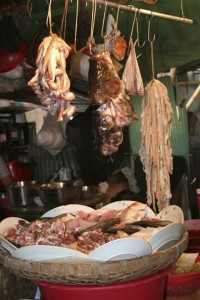 A meat stall in an open air market in Hong Kong. -- Submitted photo

The couple worked in Hong Kong for two years.

Afterward, they took six weeks to travel and then came back to the United States about a year ago.

Since she’s been back, Root said she’s been busy studying for grad school and has moved to the Twin Cities.

She said her parents’ adventurous spirits of traveling and trying new foods has rubbed off on her.

She looks forward to traveling overseas again, this time to learn new cultures in England.

She anticipated she’d be there for about a year.