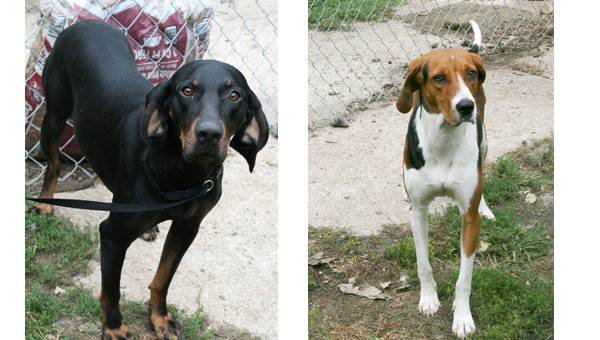 The Freeborn County Humane Society is making a plea to the community for help regarding two of their newest animals, which were discovered roaming the countryside near Wedge Nursery about a month ago. 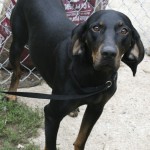 This coon hound, Emma, has five tumors and heartworms that need to be treated soon before the dog can be turned over to an animal rescue. — Sarah Stultz/Albert Lea Tribune

Humane Society volunteer Valerie Sanderson said at that time she and the Humane Society had gotten calls about the two coon hounds from various people.

The dogs had no collars and were underweight.

The Humane Society shelter was full, so Sanderson volunteered to keep the animals at her home. However, after a visit to the veterinarian, she found out that one dog — the black one named Emma — has five tumors and heartworms.

Both need to be spayed.

She estimated the cost will be about $500.

Sanderson said because of several recent events, the Humane Society just doesn’t have the funds for the surgery. There is a rescue out of state that will take them both, but not until after thesurgeries are completed. 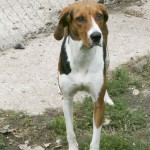 This coon hound, Bailey, was one of two dogs that recently ended up in the hands of the Freeborn County Humane Society after they were found wandering in the country near Wedge Nursery. — Sarah Stultz/Albert Lea Tribune

For that reason, the organization is making a plea to the community to help save the dogs.

They are also encouraging the public to spay and neuter their pets and to be responsible pet owners.

If people would like to contribute to the surgeries, they can send checks to the Humane Society Re: Emma at 101 James Ave., Albert Lea, MN 56007.

The dogs are both up for adoption as well.