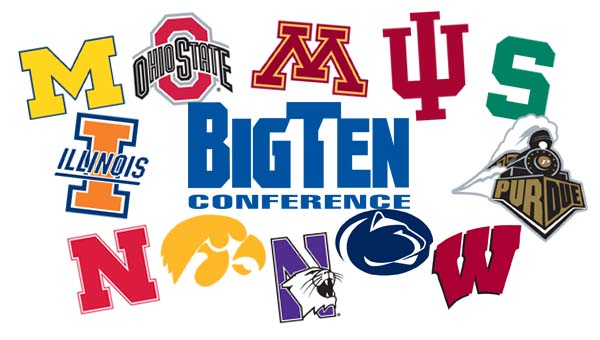 The entire existence of the Big 12 Conference was in jeopardy when six teams threatened to move to the Pac-10 in 2011 — Colorado eventually did — and Nebraska is making a move to the Big Ten Conference next season.

Like the Pac-10, the Big Ten looked to expand from 11 teams to an even number of schools to be able to implement a conference championship football game. Nebraska joined as the conference’s 12th team, but the Big Ten considered expanding to 14 or even 16 teams, drawing interest from Missouri, Pittsburgh, Rutgers and Syracuse, while strongly pursuing Notre Dame.

But when all the smoke cleared, only Colorado and Nebraska had moved, and the Big 12 was still alive but with 10 teams. Schools like Iowa State and Kansas, which may have been without a home come next season, stayed on board, pleasing KIMT sports director and University of Iowa graduate A.J. Ellingson.

“(I’m happy) for Iowa State,” he said. “Growing up in this part of the country, you know Iowa State, especially for their wrestling program. It would hurt having Iowa State going to the Mid-American Conference, and it would hurt Kansas basketball playing in a (smaller) conference. It would hurt college sports.”

While the realignments won’t affect college athletics until 2011, when it does, it will have major implications for the local fan favorites Minnesota Gophers and Iowa Hawkeyes.

Come next season, both teams will be in the same six-team division of the Big Ten Conference and will play each other every fall.

The divisions, which have not been named, were created based on geography and preserving historical rivalries and are as follows: Minnesota, Iowa, Michigan, Nebraska, Michigan State and Northwestern are in one division, while the other is made up of Ohio State, Penn State, Wisconsin, Purdue, Indiana and Illinois.

“I don’t think either division will be easy,” Anderson said. “I think Indiana and the Gophers will be at the bottom in each division, and neither team is bad so I think it’s a wash.”

The divisional realigned Big Ten will also include annual protected games to preserve long-standing rivalries such as Ohio State-Michigan and Minnesota-Wisconsin, while creating new ones like Penn State-Nebraska.

Above all, though, the expansion was driven by the need for a conference championship game, which will match one division’s regular season winner against the other, and is already scheduled for Dec. 3, 2011 at Lucas Oil Stadium in Indianapolis.

“I think (a championship game) adds so much excitement to what the Big Ten hasn’t been for a while, where we have a true champion,” Ellingson said.

Ellingson pointed to the 2002 Big Ten season as an example, when both Ohio State and Iowa were undefeated and each were crowned Big Ten co-champions.

“I know that Iowa wanted a shot at Ohio State that year,” Ellingson said.

The addition of Nebraska also adds a new dynamic to the Big Ten, competitively. While the Hawkeyes and Gophers no longer have to play Ohio State and Penn State nearly every year — they will now play them every two to three years — the two teams will have to face Nebraska and Michigan annually, and will likely need to go undefeated in their division to reach the Big Ten championship game.

“I don’t see them getting close to that standard,” longtime Gopher fan Don Ehrich, of Albert Lea, said. “I’ve been following the Gophers since I was 10 years old, and we used to routinely beat teams like Nebraska. It was easy to be a fan, but it’s a lot harder to be a super Gopher fan than it used to be.”

Ehrich and his wife, Elaine, held season tickets to the Gophers for 25 years, but stopped going once Minnesota moved to TCF Bank Stadium last season. While he thinks expansion is good for the Big Ten, he questions the motive behind a championship game.

“I think it’s a money-maker,” Ehrich said. “I think it will be a good show, but I don’t know if the kids need all that. But it should be good, especially if (Minnesota) gets in it.”

Before worrying about the Big Ten championship game, the Gophers will focus on Albert Lea native R.J. Polley and the South Dakota Coyotes, who they play at 11 a.m. Saturday at TCF Bank Stadium.